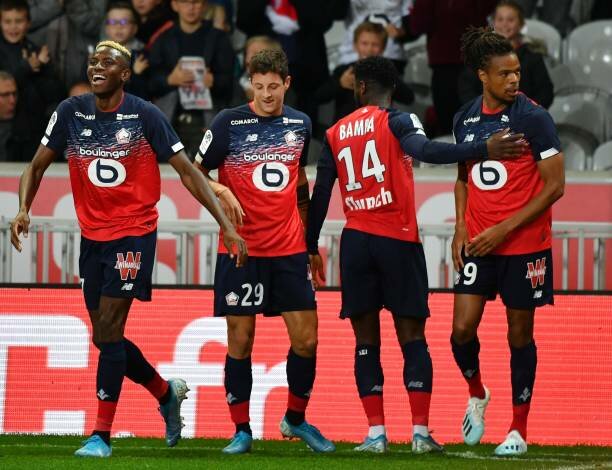 Lille's Nigerian forward Victor Osimhen (L) celebrates with teammates after scoring a goal during the French L1 football match between Lille and Nimes at the Pierre-Mauroy stadium in Villeneuve-d'Ascq, near Lille, northern France, on October 6, 2019. (Photo by DENIS CHARLET / AFP) (Photo by DENIS CHARLET/AFP via Getty Images)

Lille Metropole of France striker, Victor Osimhen has revealed the level of joy and inspiration he has playing alongside former Chelsea hitman, Loïc Rémy in the French Ligue 1 club, megasportsarena.com reports.

Speaking against the backdrop of Rémy’s lone goal for Lille in their last UEFA Champions League group fixture away to Chelsea on Tuesday, Osimhen said he had no qualms staying on the bench for the duration of the game, as it accorded him the opportunity to learn something extra from watching the French attacker and other players perform.

The Chile 2015 FIFA U-17 World Cup top scorer said he is still learning how to become a better striker and all-round top-notch player, hence his delight in watching Rémy and Lille’s other vast array of experienced players do their thing for the Ligue 1 club against Chelsea.

He made a special reference to Rémy, who Osimhen went on to disclose that he used to watch on television while he was growing up, as the 32-year-old star won the English Premier League title with Chelsea four years ago and earned 31 caps for France’s senior national team.

Osimhen beamed with glee: ”I still remember my first training with Loïc. I thought, “Wow! I saw him on TV with Chelsea and today I play with him. I observe the way he moves, how he behaves in front of the goal. I try to enrich myself with his experience.

”It’s a dream for me to play alongside this type of player, especially since Loïc is a quality player, but he is also a quality man. Experienced players are very important. It’s great to be able to play alongside players like José Fonte, Loïc Rémy, Benjamin André. When you are a young player, you arrive in a new club, you can only rejoice to receive many tips, I couldn’t have hoped for better.”

Alex Iwobi Glad To Help Everton Move To Next Round In Carabao Cup
Megasports
https://t.co/jIwwalpm70

Odion Ighalo: My Future At Man United Depends On How Well I Perform
Megasports
https://t.co/0AOMBN3Rqf