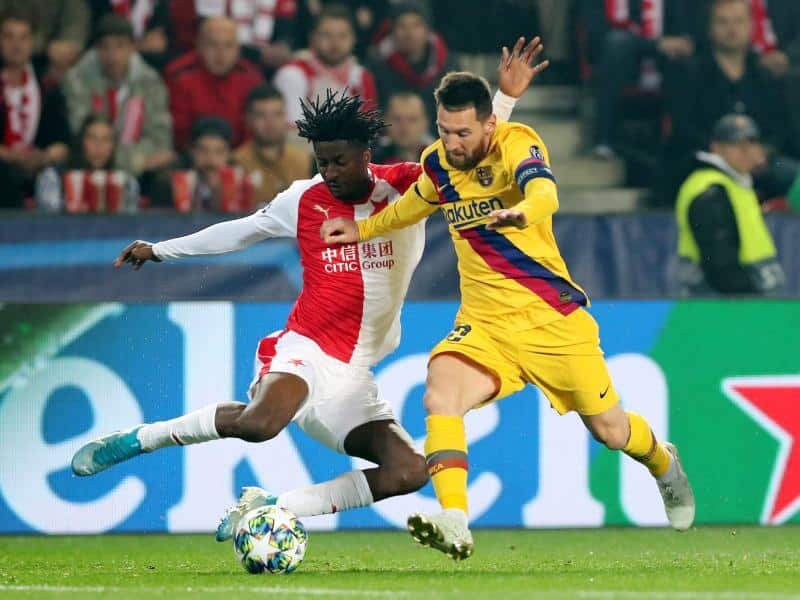 Slavia Prague of Czech Republic striker, Peter Olayinka has disclosed that memories of tough days he had at the beginning of his career keep spurring him on to achieve great things in the round leather game, with great expectations still ahead of him for club and country, megasportsarena.com reports.

With a goal in the UEFA Champions League and an invitation to the Super Eagles to show for his efforts this year, Olayinka admits he has a lot to celebrate in 2019, but recalls how torrid it was some years back, as he had to move from one country to another in search of the Golden Fleece.

However, even as the Ibadan-born lad, who got his breakthrough into Europe through 36 Lion FC of Lagos, is looking back at the tough days of his early past, he admits he has come a long way within a short while, considering how he got to rub shoulders with the best players in Europe during this season’s UCL.

Although his club eventually got knocked out of the group stage on Wednesday, following a 2-1 defeat away to Borussia Dortmund of Germany at Signal Iduna Park, Olayinka says he still feels satisfied and fulfilled, having reached this stage from Albania, Northern Cyprus and Belgium.

He disclosed further that it was an amazing experience for him being part of Prague’s historic continental outing, as he has become a focal talking point at Westfalenstadion, where the 24-year-old dreadlocks-wearing attacker is still remembered for scoring the Czech champions only goal in a 1-1 away to Inter Milan of Italy on his UCL debut back in September.

He also excelled in a goalless draw away to Barcelona last month, as Prague became first side to stop The Catalans from scoring at their home ground, Nou Camp, since February 2018, and his side stay unbeaten away until Tuesday’s slump at the feet of BVB, all of which Olayinka admits has personally been like a fairy tale for him.

Olayinka told BBC Sport: “My life has been full of more downs than ups to get here, but I am here now and the past only fuels my desire to keep pushing. Six years ago I was still watching Lionel Messi, Romelu Lukaku, Gerard Pique and Axel Witsel on television in Nigeria; and it’s been incredibly surreal playing against them in the Champions League.”