Jordon Ibe On Trial For Crashing His £130,000 Car Into Coffee Shop 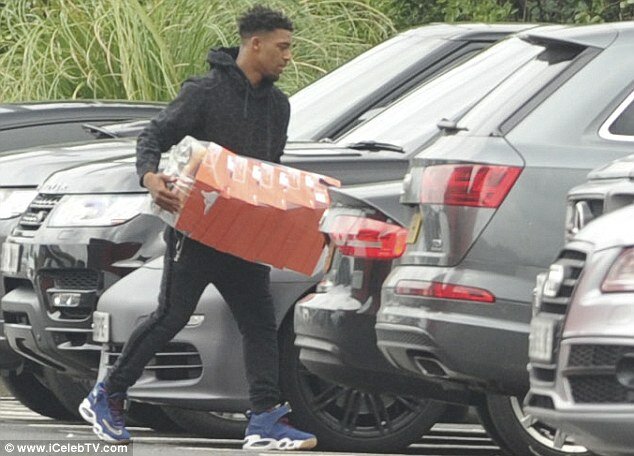 Bournemouth of England’s Nigerian-born winger, Jordon Ibe has turned up in court, after being charged for causing public damage and insecurity when he crashed his £130,000 Bentley 4×4 into a coffee shop, causing £15,000 worth of damage before leaving the scene on July 30, megasportsarena.com gathered.

Ibe, who joined The Cherries from Liverpool and lives in Poole, Dorset, denied driving without due care and attention but indicated a guilty plea to failing to stop at the scene of an accident and will now return for the start of a full trial at Bexley Magistrates’ Court on February 10, 2020.

The 23-year-old winger-cum-midfielder, who joined Bournemouth for a club record £15m fee from Liverpool in 2016, hit a Mercedes saloon car before smashing his white 4×4 Bentayga into The Pantry in Bromley, south London, thereby causing around £15,000 damage, arrived in court wearing two silver and gold chains, and a navy blue v-neck jumper with a bumble bee logo on it.

The Nigerian-born player, who was last season on loan at Reims of France and now get £38,000 a week at Bournemouth, was behind the wheel of his 4×4 in the early hours of July 30, but drove off after the collision and was subsequently tracked down through a wing mirror that was found at the crash site, while the shop suffered substantial structural damage.

A source interviewed by Daily Mirror said: “The owners got there and were gobsmacked. The entire shop front was smashed and they were worried there was structural damage. They were out of pocket from loss of earnings and having to fix the damage. They had no idea who was responsible but there was a wing mirror in the rubble.”

The prosecutor, George Crickelli said: “The defendant was driving a white Bentley at 4:50am. The defendant was involved with a collision where his vehicle has left the road and collided with a parked car and crashed into the shop in front.

“He stayed there for a while before leaving the scene. The Crown say that in respect of failing to stop the defendant’s actions did not meet the required behaviour for an accident scene. He caused minor damage but had not left any details in hitting the shop, but in hitting the shop the front had to be removed from its foundations, he actually left part of the car in his shop.

“He stated that he waited ten minutes before leaving, but members of the public called the police. Police arrived within four minutes, he told police that he returned that day, however it was over ten hours later.

“The owner of the Pantry shop that is actually damaged by the collision says the issue in dispute is she says in her statement says that she was in effect at the shop at midday the next day and no one had left a note with details.”

The defence counsel, Jonathan Morrisey replied: “Mr Ibe continues to contend that he waited for a while at the scene and nobody arrived at the scene to exchange details, he will continue to deny that allegation.”