Bukayo Saka Confesses: It Was Beautiful For Me Scoring Against Liege 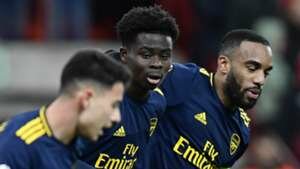 Arsenal of England youngster, Bukayo Saka is still basking in the euphoria of his goal and assist that helped The Gunners turned defeat into celebration on Thursday in the UEFA Europa League, adding that he felt on top of the world to net the crucial equalizer in his side’s 2-2 draw away to Standard Liege of Belgium, megasportsarena.com reports.

Saka said it was a beautiful feeling to make such an impact in the encounter, as his goal ensured the London club moved into the round of 32 knock-out stage of Europe’s second tier clubs’ competition, with an additional boost of confidence heading into this weekend’s home game against Manchester City in the English Premier League.

It looked tight, as The Gunners kept an eye on Sunday’s English Premier League clash with Manchester City and still looked to secure top spot in Group F but, midway through the second half in Liege, the gamble looked to have backfired – with Standard two goals to the good and Eintracht Frankfurt of Germany beating Vitoria Guimaraes of Portugal in the game’s other group.

He recounted how much of a pressure the team felt when they were two-down, then started firing for a third goal that would take them through, since they did not know the result between Frankfurt and Mikel Ndubuisi Agu’s Guimaraes, but it turned out to be good news afterwards.

Finishing second in the group – and potentially drawing the likes of Inter Milan and Ajax – was looking more and more likely, until Saka intervened, and buttressed the role played in his career uplift by Ljungberg, who coached a number of Arsenal youngsters during his time with club’s academy, has played in his development and the 18-year-old stepped up for his mentor.

The dark-skinned lad, who has assisted six goals for Arsenal in all competitions this season, two more than any other Gunners player, is now looking towards this Sunday’s cracker at Emirates Stadium, ahead of which pointed out that the spirit is high and still rising in The Gunners’ camp.

With memories of their thrills of Thursday still fresh in mind, Saka enthused that the team will now aim to continue against City the momentum that began with Monday’s 3-1 victory away to West Ham United in a high-profile London derby.

Saka stated: “It was beautiful for me because that is what I am judged on, scoring and assisting, so to score and to make one is a good night. We feel we are taking a lot of confidence. In our last game in the Premier League we won, and while we didn’t win here we came back.

“We always keep our heads because we knew what the stakes were and that if we lost we could possibly be out. It’s a good feeling because we were pushing for the third goal to try to win the game. Everyone came into the changing room after and found out we were top of the group.”