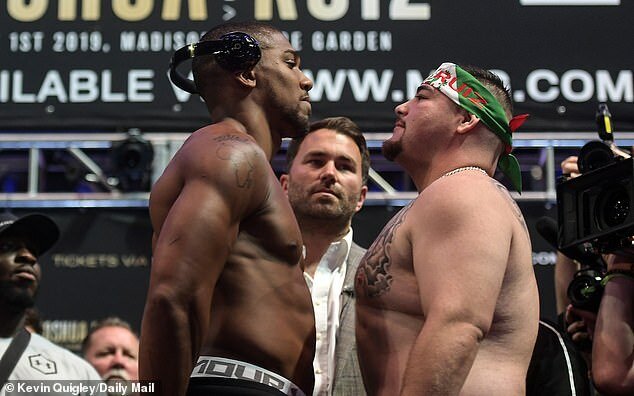 In what could be reminiscent on similar snickering directed at Ruiz, before the Mexican-American shocked the watching world by knocking ‘AJ’ out on June 1 in New York, USA, Hearn is daringly going down the same road in mocking the three-belt holder.

Such it was that Joshua’s promoter has labeled Ruiz ‘tubby,’ despite the world heavyweight champion appearing to have slimmed down while also displaying his fast hands ahead of their much-anticipated rematch on December 7 in Diriyah, Saudi Arabia.

Back in June, the boxing world will remember how the unexpected winner, Ruiz weighed in at 268lbs (19st 2lbs) while ‘AJ’ registered 247.8lbs (17st 9lbs 13oz) for his US debut at Madison Square Garden in The Big Apple.

The British contingent chanted ‘Who are ya?’ and ‘You fat b****rd’ as the then three-belt title challenger walked to the stage before his final face-off with the champion before their fight.

After the weigh-in Joshua told Sky: “I just wanna say thank you for coming out and supporting.
“It’s all about getting in the ring and doing the job, so I’m looking forward to it.”

When asked for his final prediction, the champion sent a message to fans watching back home in England: “I won’t keep you up too long.”

However, Ruiz, who has since appeared to have piled on the weight before resuming training recently for the December date, has also posted footage of himself hitting the pads, displaying explosive hands now just six weeks out, but Hearn insinuated that the holder is confused and only putting up a show to personally boost his confidence.

Hearn told IFL TV: “I thought he looked quite tubby. I actually thought he looked heavier than he did previously. Make your own mind up. That clip that I saw, which was him training in San Diego, I didn’t think that he looked slimmer than he did last camp. There was one picture of him leaning forward. The old ‘lean forward’, tucked back, with a little pout, can make you lose half a stone. Maybe he’s done that.”