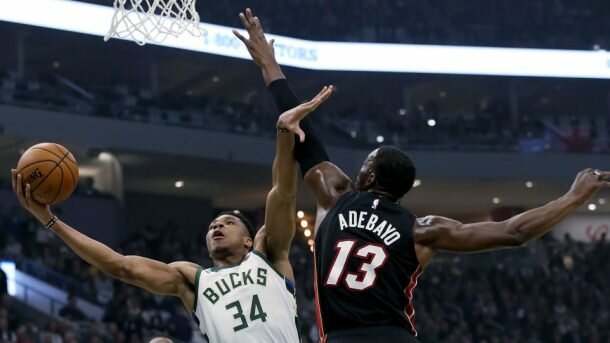 Adebayo orchestrated a massive comeback for his side in the away fixture, as Antetokounmpo’s side appeared in full control of their home opener, leading by double digits through most of the second and third quarters, by as much as 21 points, such that the game seemed all but over.

However, when the fourth quarter came, Miami showed that they were not ready to go home empty handed, but The Bucks seemed to take their foot off the gas and went cold, missing nine straight threes while The Heat went on a 20-5 run.

Adebayo’s side also put up 39 points in the fourth quarter, knocking down six threes, then took the lead and control down the stretch, while Milwaukee were stunned and The Heat just had to hit their free throws to secure the win.

This was despite a handful of lost dunks by Miami’s stars, as Adebayo missed one, then Justise Winslow missed two, after a rebounding foul by Robin Lopez where he just turned and pushed his opponent rather than box out.

It still left Heat a chance, though, down 121-119 with three seconds left, All-Star Khris Middleton went up for a contested three to win it, and it was up to Antetokounmpo to save the day for the hosts, but all his spirited efforts fell just short, leaving Adebayo as the top Nigerian on the night.

Duncan Robinson hit a 3-pointer for Heat to tie the game at 105 with 7:00 to play in regulation time, Dragic then added a pair of free throws to give Miami their first lead since 2-0 then Kelly Olynyk, who had 14 points off the bench, hit back-to-back 3-pointers to put the visitors ahead 113-107 with 4:52 to play.

With Miami up 121-119 with three seconds to go in regulation, Middleton shot an air ball and Antetokounmpo tipped it in at the buzzer to send the game into overtime, but Adebayo then sank four free throws in the extra period and Dragic scored six points in overtime to lift Miami to a second straight win in the new season.

Goran Dragic scored 25 points off the bench, Adebayo added 19 points and 13 rebounds, and The Heat rallied to beat Antetokounmpo’s Bucks in overtime 131-126, despite the hosts initially hot with a 21-point lead in the third quarter at home, where they still lost in the end.

After trailing 74-53 with less than 11:00 to play in the third quarter, Heat outscored Milwaukee 78-52 the rest of the way, including 49-33 in the fourth quarter and overtime, much to the agony of Antetokounmpo, who finished with 29 points, 17 rebounds and nine assists.

Last season’s MVP, who also had eight turnovers and fouled out with 2:31 to play in overtime, was circumspect right after the game, reeling out missing links in his side’s performance and admitted they need to take lessons learnt from the game as needful assets for their next outing.

Heat coach, Erik Spoelstra countered: ”A tremendous amount of perseverance and guts. Our guys made some really big-time plays in the second half. Our level of intensity, urgency went up. If you are going to try to beat one of these teams on their home floor, you are going to have to play a lot harder than we did in the first half. It was one inspiring play after another.”