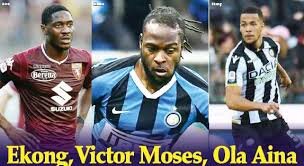 The Italy-based Nigerian trio of Inter Milan’s Victor Moses, Ola Aina at AS Torino and William Troost-Ekong of Udinese are heading back to training with their respective clubs this week, as the resumption of action in the Italian Sere A is looming large, megasportsarena.com gathered.

Troost-Ekong, Moses, Aina and other players in the Italian top-flight have been observing a forced break on account of coronavirus, but the commencement of action in the German Bundesliga has now inspired football officials in Italy to also outline steps towards a much-anticipated return to football activities.

Consequently, Moses, Aina and Troost-Ekong will be among the lot across the peninsula that will head back to the training ground on Monday, as Serie A clubs will resume full squad activities, sequel to permission granted them by Italian Prime Minister, Giuseppe Conte.

It is now a huge relief for Moses, Aina, Troost-Ekong and other players as well as their fans, after the Italian government confirmed that squads are now able train together for the first time since the league was suspended on March 9.

Although no exact date has been set for the restart of the Serie A season, observers see it as a boost for the players, coaches, fans and the club officials, who voted for the likely resumption of matches, wth 16 opting for June 13 as a potential day and four preferred June 20 during a league teams’ assembly on Wednesday.

However, while all the clubs are now allowed to resume training this Monday, it will only be done with their players lining out on individual basis and respecting physical distancing rules, as officials are still wary about the possibility of a second wave of outbreak n the coronavirus pandemic.

Moses’ gaffer at Inter Milan, Antonio Conte said: “From May 18 retail stores, hairdressers, beauticians, bars, restaurants, pubs, football teams’ training sessions and museums will start again. But always in compliance with the regulations and with the control of the Region.”