on: May 24, 2020In: UncategorizedNo Comments
Print Email 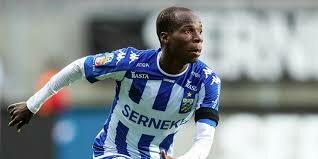 IFK Gothenburg of Sweden midfielder, Alhassan Yusuf has declared that he is determined to stay focused on dong well with his Scandinavian club and keeping himself on top of his game, in spite of reports revealing that summer transfer interest is intensifying for him, megasportsarena.com reports.

The former Akwa United of Uyo youngster, who was a key member in Nigeria’s home-based national team before travelling abroad, admitted he has heard about interest coming his way from Sheffield United and Wolverhampton Wanderers of England as well as Ajax Amsterdam of Holland and FC Copenhagen of Denmark, but stressed that he s not allowing it get to his head.

He also admitted he would love to play in England, but went on to state categorically that he will not put the cart before the horse, as he is ready to bid his time and continue playing to the best of his ability with IFK, in order to show how much he appreciates the opportunities they have given him in their team.

Yusuf posited: “Right now it’s just a matter of focusing on what exists, in the present, but of course it’s always fun to hear about interest from England, that they want to recruit me. It’s encouraging. Yes, and it’s a dream to play there. It is the best league in the world and I miss watching it.”