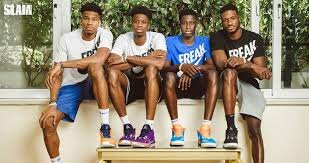 Megasportsarena.com has gathered that the younger brother of Milwaukee Bucks of America’s Nigerian-born basketball star, Giannis Adetokunbo (Antetokounmpo), Alex, has opted for a base in Europe for the foundation of his career in the game of giants.

While ultimately setting his mind on following his older brother’s strides in USA’s National Basketball Association (NBA), where he was most valuable player last season and looking good to keep the award before the current campaign was put on hold by coronavirus, Alex Adetokunbo (Antetokounmpo) is setting sail first in Europe.

A report by Eurohoops reveals that the 18-year-old Alex, who was raised in Greece, but moved to Milwaukee after his older sibling was drafted by The Bucks, spent the last couple of seasons going through his academics at Dominican High School but, instead of going to college in the United States, he is heading back to Europe to play professionally.

The youngster reportedly had offers from some of USA’s top division schools, but he has opted to play in Europe, from where he will aim to become the fourth Antetokounmpo to reach the NBA; as Giannis’ other two brothers, Thanasis and Kostas, have both spent time in the USA.

Thanasis, who previously played for New York Knicks, currently stars with Giannis at The Bucks, while Kostas has played for Dallas Mavericks and Los Angeles Lakers, thereby providing adequate references points for Alex, who will be eligible for the 2021 draft, with hint at a strong possibility four of five Antetokounmpo brothers getting to play in the NBA at the same time.

Alex Antetokounmpo told Eurohoops: “I am examining my options. I have a few choices from the States, but I have decided to play in Europe. I want to become a pro as soon as possible. I was born and raised in Europe; I know European basketball and the best thing for me would be to sign a contract with a European club. I will have to train and compete against grown men, I will experience strong competition and pressure and I will evolve on every level.”