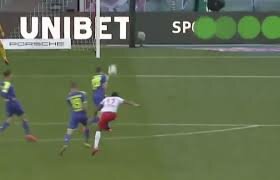 RB Leipzig of Germany winger, Ademola Lookman was involved in a piece of weird drama on the first day of resumption of action in the German Bundesliga, as the Nigerian-born former Everton of England youngster struck a pitch- side cameraman with a wayward shot, megasportsarena.com reports.

Lookman played as a second half substitute in the encounter and, in his determined bid to finally confirm that he s back to his best, which has not been seen of him since his second coming at the Red Bull-owned outfit, he made a different kind of impact by hitting one of the few cameramen that were present inside the almost-empty stadium.

A scene that cut between anxiety and farce was enacted inside Red Bull Arena, when the shot from Lookman hit the cameraman in the head on Saturday, as the former England youth international tried to make hay from outside the box during their match against SC Freiburg.

However, instead of curling into the top corner as planned, the ball faded away from goal and struck the camera operator in his head, on an evening pressing worries about coronavirus caused all games to be played behind closed doors, with the substitutes are physically distancing and players celebrating goals only with forearm bumps.

A report by sportsmail added: “Thankfully the unlucky cameraman appeared to be okay, but Lookman’s effort followed the tone of Leipzig’s game, where they tried 17 shots on goal but could only score once. The Englishman also missed another chance, flashing a volley wide with the goal at his mercy.

“Freiburg only had one shot on target, but made it count to earn a surprise draw. They even thought they had stolen a win in the last minute of injury time, however the strike was ruled out for offside.

“Leipzig are still fighting near the top of the league in third place, however only managing a point means they fall further behind Dortmund in second, who got a 4-0 win over Schalke in their first game back.”