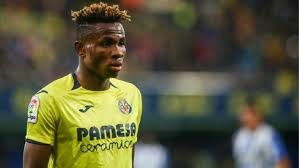 Two Nigerian players based in Spain, Samuel Chukwueze and Oghenekaro Etebo have been hit with startling news that both of their clubs are entwined in match fixing allegations, even as officials of the two teams have spoken out to deny the charges, according to reports reaching megasportsarena.com.

In what would bring to mind a similar scenario that affected former Super Eagles’ striker, Ikechukwu Uche during his days with Real Zaragoza, Chukwueze and Etebo will now keep their fingers crossed that everything will work out n the positive light for their respective teams.

However, in contrast with Uche’s case, though, when the ex-Eagles’ striker was personally named among the suspects n the match-fixing investigation that rocked Zaragoza for five years, Chukwueze and Etebo are not individually charged n the ongoing setting.

Nonetheless, Chukwueze and Etebo can feel safe further in knowing that Villarreal and Getafe have both denied any wrongdoing, after the Spanish media reported that the nation’s police are investigating possible match-fixing in a 2-2 draw between the two clubs last year in LaLiga.

The controversy came to light when a Spanish newspaper, El Pais reported that the match was being looked at as part of Operation Oikos, which was launched last year and led to 11 people being arrested on suspicion of forming a match-fixing group to profit from betting on games.

Dramatically, while LaLiga officials confirmed that they had opened a confidential dossier on the matter, as part of Operation Oikos, the Spanish league’s governing body added that details of the case will not be made public unless it goes to trial.

Chukwueze’s club stated: “Villarreal and its first team wish to show their absolute rejection of the accusations made today and categorically deny being involved in any way in fixing the game against Getafe on the final day of last season.

“As it has done on repeated occasions, the club condemns any conduct that damages the essence of sport and competition and stresses that the values of transparency, ethics, integrity and fair play are fundamental to its philosophy;” and Etebo’s team added: “Getafe wish to categorically deny any involvement with this matter and this type of conduct.”