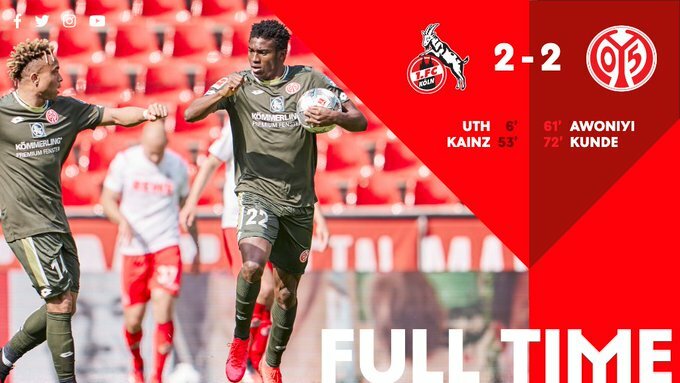 SV Mainz of Germany striker, Taiwo Awoniyi has admitted he was deeply delighted in scoring his first ever goal for the club he joined last summer and the lad on loan from Liverpool of England hopes to keep hitting target in the resumed German Bundesliga season, megasportsarena.com gathered.

Awoniyi made history on Sunday, as he became the seventh youngest Nigerian player to hit target in the German top-flight and helped his side pull off a 2-2 draw with Kingsley Ehizibue’s FC Cologne, as the former youth international showed impressive composure to tuck home in the 61st minute, which inspired a second half comeback for his side.

Ehizibue’s side got a two-goal lead through Mark Uth and Florian Kainz, but Awoniyi got off the bench in the 55th minute and pulled one back six minutes later, when he bundled the ball home from close range from an assist by Bote Baku, after which Pierre Kunde pulled them level in the 72nd minute and helped Mainz get a share of the points.

The UAE 2013 FIFA U-17 World Cup winner was all smiles at RheinEnergieStadion on Sunday afternoon, as his only other goal in German football came four years ago, while he was still with FSV Frankfurt in the lower division, and he netted against FC Heidenheim in March 2016.

It also means Awoniyi, aged 22 years and 279 days, became the seventh youngest Nigerian player to score in the German top-flight, with Austin Okocha the youngest at 19 years, 3 months and 28 days, while Solomon Okoronkwo, Anthony Ujah, Sunday Oliseh and Chinedu Obasi were also all younger than the latest addition when they netted their first Bundesliga goals.

After netting in his seventh appearance for Mainz since his arrival from Liverpool last summer, Awony will now aim to keep hitting target for his struggling team as they remain 15th in the 18-team table with 27 points and only eight rounds of fixtures remaining in the German top-flight.

Awoniyi, though, is excited for now, and declared: “I’m really happy about scoring my first goal for Mainz! We came back very well as a team today and fought our way back into the match!”