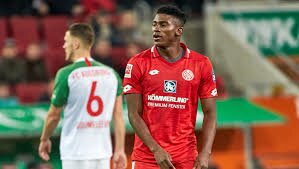 SV Mainz of Germany striker, Taiwo Awoniyi could not add to his first goal of the German Bundesliga this past weekend, as he fired blanks while playing as a substitute on Sunday, while Anthony Ujah faced the same blight with Union Berlin on Saturday, but Jamilu Collins was in the first 11 for SC Paderborn and Jordan Torunarigha also started for Hertha Berlin, megasportsarena.com reports.

Collins lasted all 90 minutes for Paderborn at Benteler-Arena, as his side played out a 1-1 draw with TSG Hoffenheim, who had Nigerian-born former Germany under-20 captain, Kevin Akpoguma on their bench for the entirety of the game.

Another Nigerian-born player, Joshua Orobosa Zirkzee, a Holland under-19 international, also started on the bench for Bayern Munich in their 5-2 spanking of Eintracht Frankfurt, after taking the lead courtesy of Leon Goretzka’s 17th minute goal.

On Friday, Torunarigha was in action for 90 minutes and helped Hertha BSC thrash Ujah’s Union Berlin 4-0 in the Berlin derby at Olympiastadion, where the former Super Eagles’ striker got off the losing side’s bench 12 minutes after the restart.

Ujah’s compatriot and teammate, Suleiman Abdullahi was not dressed for the match, in which second half goals by Vedad Ibisevic, Dodi Lukebakio, Matheus Cunha and Dedryck Boyata gave Hertha a comprehensive home victory.

On Sunday, it was an evening of doom and gloom for Awoniyi, as he could only play as a 61st minute substitute, in place of Jean-Paul Boetius, while Nigerian-born teammate, Karim Osinowo started but was replaced by Levin Mete Oztunal in a 5-0 loss at home against RB Leipzig, who had Ademola Lookman get off their bench in place of Christopher Nkunku in the 70th minute, while Kingsley Ehizibue bowed out with injury after only 59 minutes of action with FC Cologne.