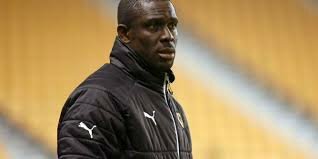 Former Super Eagles’ midfielder, Seyi George Olofinjana has been speaking in his position as loan contracts’ manager at one of the clubs he played for ion his heyday, and says the transfer policy at Wolverhamnpton Wanderers should be respected by any player in the team, megasportsarena.com reports.

Olofinjana made the assertion on the grounds of recent controversy surrounding the future of Adama Traore in the giant-killing English Premier League club and, although he admits the fast-paced battling winger could leave this summer, his departure must follow the right procedure.

The Wolves’ loan manager noted that the French international, who has been linked with a likely move to EPL champs-in-waiting, Liverpool, has the right assets and quality that is needed at Molineux Stadium, but admitted his club could be forced to let him go, once the right manner of approach is made by his suitors.

Olofinjana told Goal: “He is a good player and we’ve all seen what he is capable of doing. His sheer pace, power, goals scoring stint, skills on the ball and also running the length of the pitch.

“He’s been doing it for the past few seasons, so we are very much aware of what he brings to the table. In terms of what will happen to him going forward, the league has not ended, so we need to wait for that. We can’t ignore the fact that he has done very well for the club.

“Anybody can leave Wolves, he came from somewhere and he can leave any day. Regarding genuine transfer interest in our players, there are procedures and policies that we consider as a club, they tell us whether it is the right step for us or not.”