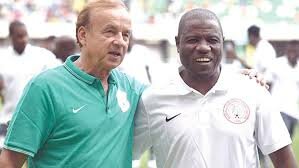 The president of Nigeria Football Federation (NFF), Amaju Melvin Pinnick has cleared the air on what soccer analysts and fans across the country have tagged contentious issues affecting Super Eagles’ coach, Gernot Rohr’s new contract and the reintegration of Salisu Yusuf into the scheme of things, despite a recent ban by global body, FIFA, megasportsarena.com reports.

In throwing official light on both matters, Pinnick stressed during a media call that the NFF have decided to stick with Rohr in order to maintain continuity in the Eagles’ technical crew, while Yusuf has been absorbed back into the nation’s coaching fraternity because he served his full punishment and should be allowed to show that he has accepted all areas of correction.

While also speaking on various other issues, including financial difficulties caused by coronavirus pandemic, funding of the national teams, monetary emoluments for players in the youth squads and resumption of the Nigerian Professional Football League (NPFL), Pinnick added that crucial issues affecting the soccer governing body are always decided through collective deliberations.

He maintained that all pending matters will be discussed by the NFF’s executive committee, after which the top officials will interface with the sports minister, Sunday Dare, such that no one in the Football House can be accused of taking unilateral decisions affecting the nation.

The NFF boss submitted that Rohr was handed a new contract running till the summer of 2022 because everyone at the soccer body felt the Franco-German gaffer deserved to continue on the job and, since the tactician was also accorded the opportunity to reject the proposal put before him but consented to all terms stated therein, there was no need to cut him off.

Pinnick expatiated: “We are of the view and conviction that Mr. Gernot Rohr deserves to continue the job he is doing with the Super Eagles. I believe he has earned it. He had a right of first refusal so it was not a problem. We included a few other things in his contract but at the end of the day, we were able to come to an agreement.

“Presently, I am proud of the squad that we have. Without gainsaying, we have good players competing for every department on the field in the Super Eagles squad. It is exciting and we believe the team is on to a good thing. It is important that we work with him to nurture together a team that we can all be proud of.

“Coach Salisu Yusuf has finished serving his sanction and that was why we sent him on secondment to Rangers International FC to help the club in its CAF Confederation Cup campaign. Of course, it is not an individual decision as the Board has to still look at it.

“We also need to cross-fertilize with the Ministry of Youth and Sports and do some other consultations. But the truth is, he has served his punishment and I always said from Day One that punishment is meant to reform and not to deform.

“Of course, the priorities for now would be the 2021 Africa Cup of Nations qualifiers and the 2022 FIFA World Cup qualifiers involving the Super Eagles, and the Women AFCON assignment of the Super Falcons. Those are the subheads guaranteed for now.

“(The) COVID-19 pandemic has wrought some havoc and we just have to be realistic in our expectations from both the Government and our corporate partners. So, we are working with that reality and with that mindset.”