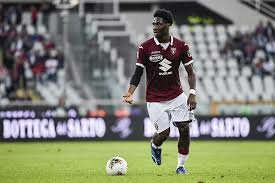 AS Torino of Italy defender, Ola Aina has been handed a ‘three-match trial’ by the Italian Serie A club, for him to prove his mettle and avoid getting sacked by the club at the end of this season, megasportsarena.com learnt.

This is sequel to a dip in form for the Super Eagles’ right-back, who has failed to replicate the top form that was seen of him during his initial spell on loan with the club from Chelsea of England.

Sadly, Aina’s second and full season with The Maroons has not been as spectacular as his early days were with the Turin-based side, such that the club’s top brass are now thinking of letting him go, and he is no longer guaranteed a spot in the squad for the 2020/21 campaign.

Details of the report by Calciomercato revealed that the dark-skinned former England youth international will now have to convince Torino’s buff, led by the club’s technical director, Davide Vagnati that he still has the quality and ability required by the team in the Italian top-flight.

This means he will now have to be on top of his game and go full throttle in their last 13 league games of the season, failing which he will be deemed surplus to requirements and be sold, even as the lad that was signed in a full contract from Chelsea, in a deal worth 9.8 million euros and is meant to run until June 30, 2023.

However, while the 2019 Africa Cup of Nations bronze medalist truly impressed to earn the deal at the end of his loan spell last summer, his performances have not been consistent this term, in spite of being a regular with the Super Eagles, starting eight of their last eleven games and going the distance in all but one of those appearances with the Nigerian national team.