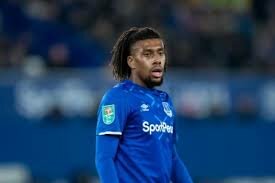 It was a case of varying fortunes on Thursday for three players of Nigerian descent, as Alex Iwobi passed a late fitness test in order to start with Everton of England, but was stopped from scoring by Southampton’s goalkeeper, while Odion Jude Ighalo was a substitute for Manchester United in a 3-0 away victory; and Stefano Chuka Okaka scored for Udinese of Italy.

While Okaka struck for Udinese in the 35th minute of their 3-0 victory away to SPAL, but was replaced by Lukasz Teodorczyk in the 82nd minute, and William Troost-Ekong was benched for the entire duration of the game, Ighalo replaced Anthony Martial in the 79th minute of United’s 3-0 win away to Aston Villa and Iwobi started for Everton but was yanked off in the 46th minute of their 1-1 draw at home against The Saints.

Ighalo had the best team result on the night even as he again played as a sub in his ninth match for United in the EPL, as he was part of the happy lot after the final whistle of the game at Villa Park, for which he was introduced off the bench with only 11 minutes remaining.

Megasportsarena.com gathered that statistics provided by OPTA also revealed that Ighalo’s team set two new EPL records with that victory, as The Red Devils became the first side in history to win four consecutive games by a score margin of three or more goals.

United also became the first team to beat an opponent on every day of the week, with their win against The Villans being the sixth fixture to be played on all seven days in the elite competition, while Ighalo helped his side achieve both records, having got off their bench in the four games under review – versus Sheffield United, Brighton & Hove Albion, Bournemouth and Aston Villa.

Although he is yet to hit target in nine EPL appearances, all as a substitute, Ighalo, who has five goals in four other matches that he started for the Old Trafford outfit, has only 86 minutes on the pitch in England’s top-flight; while helping the squad garner 58 points, one less than fourth-placed Leicester City, with only four games left to end the season.

Also in England on Thursday, former Chelsea and Liverpool striker, Dominic Solanke watched from Bournemouth’s bench for 90 minutes, while Nigerian-born Denmark U21 international Philip Chinedu Billing was out with an ankle injury, as The Cherries played goalless with visiting Tottenham Hotspur at Vitality Stadium.

Everton and Southampton shared the spoils with a 1-1 draw at Goodison Park, with Iwobi for the first half for The Toffees, who did not dress Dennis Adeniran, while Nathan Tella was also not in The Saints’ squad.