Frank Onyeka Misses FCM’s Clash With Copenhagen Due To Suspension 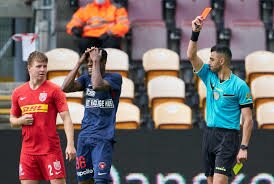 FC Midtjylland of Denmark midfielder, Frank Onyeka missed out on action with his team against FC Copenhagen due to accumulated cards, which meant he was suspended for the title-winning match at MCH Arena on Thursday, megasportsarena.com reports.

The holding midfielder was ineligible for the game after getting himself dismissed for a second bookable offense in the 95th minute of The Wolves’ 1-0 victory against Nordsjælland on Sunday, which took his total tally of yellow cards to 10 and he had to be axed for the crucial encounter.

Onyeka was first yellow carded in the 39th minute, then got sent off for an on-pitch altercation with Nordsjælland’s Mads Døhr Thychosen, who was also shown a yellow card; but it was the Nigerian lad that came off worse for it, having accumulated ten yellow cards from 31 matches.

Midtjylland’s appeal to the Denmark Football Union’s Disciplinary Body to overturn Onyeka ‘s second yellow card was not accepted, thereby knocking him out of the crunch fixture against FC Copenhagen; a game that was bound to see Onyeka’s club crowned Danish champs for the third time in their history – once they avoided defeat against their nearest challengers.

Similarly, Antalyaspor of Turkey midfielder, Paul Omo Mukairu is out of Sunday’s derby between his club and Alanyaspor, as he has to serve out a one-match ban after getting fourth booking of the season.

SCORE Nigeria added: “Mukairu, a hard working midfielder, winger or striker, was booked for the fourth time in Wednesday’s 2-2 draw at championship-chasing Trabzonspor. He caused the penalty for Trabzonspor to lead 2-1 before Antalyaspor fought back to salvage a draw.

“Mukairu has enjoyed a remarkable debut season in the Turkish top flight. He has played 29 games in all competitions and scored four goals. For Antalyaspor, Sunday’s clash against neighbours Alanyaspor will afford them a chance to avenge their ouster from the Turkey FA Cup in the semifinal.”