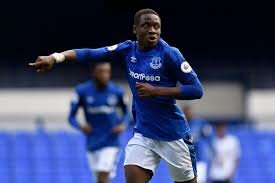 Everton of England have finalized plans to offload their Nigerian-born youth team midfielder, Dennis Adeniran, but their English Premier League rivals, Chelsea have decided to retain three of his compatriots for the 2020/21 season, megasportsarena.com reports.

While Chelsea will keep hold of Prince Adegoke, Derrick Abu and Kelechi Chibueze, Adeniran will have to weigh his options in deciding his next port of call, following reports that a number of clubs have returned for his signature, after initially checking to get him on loan in the January transfer window, but Everton opted to keep him for the remainder of the season.

However, despite that remarkable show of trust in him back then, Liverpool Echo has reported that The Toffees are now ready to let him go, as they intend to loan him out to gain first team experience elsewhere but, considering that his current contract expires in June 2021, he could sign a new deal before heading out of Goodison Park.

The opportunity of getting regular action elsewhere is timely for the 21-year-old Adeniran, who, since joining Everton from Fulham in the summer of 2017, has yet to make his first team debut for The Toffees, despite being an unused substitute against Leicester City in the League Cup last year December.

The youngster, who represented England at the 2016 European U17 Championship, while also flaunting caps for The Young Lions at under-18 and under-19 levels, is capable of playing central midfield, right wing and attacking midfield roles, but his progress has been largely stunted, in spite of having trained with Everton’s first team since the restart of this season last month.

On the other hand, Chelsea have retained the trio of Adegoke, Abu and Chibueze have all signed new scholarship deals at The Blues’ Cobham training ground, as they continue making progress with the London-based club, for whose under-18 team they frequently made the bench while still schoolboys, and were part of the squad that won the Premier League U16 International Tournament last year.

Chelsea have released an online introducing all three Nigerian-born lads as part of their 2020-2021 academy scholars, with special declarations made by Adegoke and Chibueze, who are both goalkeepers, as well as Abu, a very mobile full-back; as the troika celebrated their new contracts at Stamford Bridge.

Adegoke said: “I am 16 and I am a goalkeeper at Chelsea’. Hard work definitely, consistent hard work throughout the whole time I have been at Chelsea;” and Abu added: “I am an attacking fullback that loves to get forward, that loves to get crosses in. I have been here since I was ten years old and the dream is to be one of the best players in Europe and at Chelsea.”

Chibueze concluded with enthusiastic plaudits: “I didn’t even think it was possible to get to this stage. To sign as a scholar, great club like Chelsea, is unbelievable. The hard work continues, the grind continues. I am not stopping now, I have come so far. There is no point stopping.”