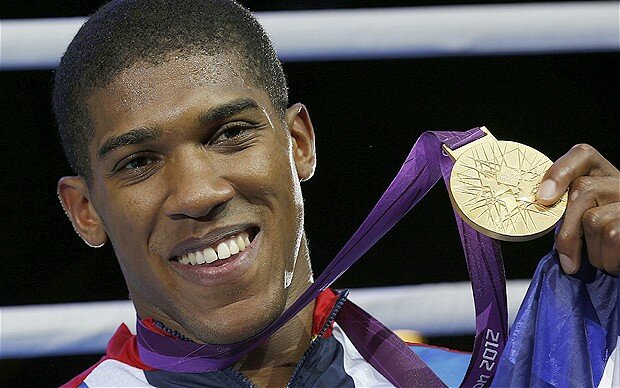 Nigerian-born world heavyweight boxing champion, Anthony Olaseni Oluwafemi Joshua appears to cherish winning the London 2012 Olympic Games gold medal for Great Britain than being two-time possessor of four professional belts in his global class, if the words of one of his former pals in the amateur cadre are anything to go by.

Megasportsarena.com reports that this the astonishing verdict of Britain’s leading amateur boxer of the moment, Frazer Clarke, who opined that Joshua’s best achievement to date n the roped square is his 2012 Olympic gold medal; because it is the ultimate and the pinnacle of what he could achieve for his country.

‘AJ,’ though, is still receiving backing from his pal for him to keep stunning the paid ranks, with great words projecting him higher in the view of Clarke, who appeared to have been in a good position to be Team GB’s super-heavyweight representative at the Tokyo Olympics originally scheduled for this summer, but his dream is now in doubt after t was postponed until 2021.

It is another big blow for him, as Clarke missed out on representing Britain at the previous two Olympics and, in his absence on home soil in 2012, Joshua claimed the super-heavyweight gold, while Joe Joyce went to Rio 2016 but controversially lost in the final to take the silver medal.

Now 28, Clarke is questioning whether his Olympic hopes can ever be fulfilled, and he confessed that he would love to be n Joshua’s shoes, not as a rabble-rousing pro beating up every opposing heavyweight in sight, but as a gold medalist at the world’s biggest multiple-sports gathering.