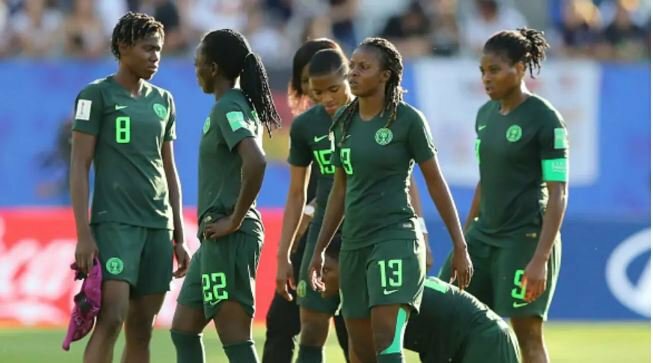 However, while the Falcons could not edge aside Cote d’Ivoire in the race to Tokyo 2020, the eight-time Africans champions still remain number one on the continent, with a haul of 1, 614 points (compared to the previous month’s 1,643) keeping them ahead of Cameroon.

The Lionesses are second placed on the continent, but also fall three steps down on the global level to 49th, with 1,486 points, as against 1,514 the previous month, while South Africa are third in Africa, and stuck at 55th in the world, despite gaining a single point from 1,433 to 1,434.

Africa also has one of this month’s big movers up the log, alongside CONCACAF, as the Olympic Games qualifiers in both continents have produced the most significant recent upsets, with Kenya (up 10 to 133rd) after beating Ghana (60th, down 10) over two legs.

Similarly, Congo DR (108th, up 10), who also enjoyed a double-digit rise, were rewarded for an equally unlikely home win over Cameroon, while St Kitts and Nevis’s (up 7 to 127th) stunning away victory in Trinidad and Tobago (72nd, down 11) providing the biggest surge, after taking the victors through to the final stage to Tokyo 2020.

On the overall scale, USA end 2019 as they began it, on top of the FIFA Women’s World Ranking, while Brazil also head into 2020 in familiar territory, having made an immediate return to the top ten – this after dropping out in September for the first time in their history.

Having been rewarded for recent friendly victories over England (6th, down 1) and Canada (8th, down 1), the Brazilians (9th, up 2) are essentially the only notable climbers in the table’s upper echelons. Korea DPR (11th, down 2), with whom they swapped places, dropped down due to not having played since the ranking’s last edition.