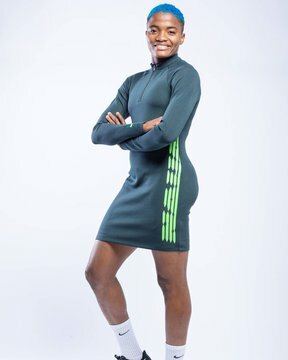 Nigerian women’s national team, Super Falcons’ youngster, Rasheedat Ajibade has expressed delight and excitement on the opportunity she got to unveil the country’s new range of kit for various levels of their football squads, megasportsarena.com reports.

The new range of jerseys, shots, socks, training gear, boots and balls supplied by American sports kit manufacturers, Nike are billed to be launched by the men’s team, Super Eagles on October 9, when they face Cote d’Ivoire during an international friendly in Austria.

However, ahead of that game, and a similar fixture versus Tunisia four days later at same venue, the privilege of unveiling the kit to the public glare came for Ajibade on Sunday, and the former FC Robo Queens of Lagos whiz-kid was all-smiles as she performer the honours in style.

They all combined in Sunday’s virtual event sanctioned by Nigeria Football Federation (NFF), which had earlier disclosed that the new range of jerseys for all the country’s national team’s is the next step by their official kit-sponsor, Nike to wow the globe with aesthetic excellence, as they did with the current range that was launched for the 2018 FIFA World Cup in Russia.

Additional information from independent sources also confirmed that various international and local retailers have received the Nigeria 2020 football kit collection at their stores, where the Vapor Match versions will be available to buy starting from next week.

The report added that the Eagles’ home kit has been spotted at a store in South Korea, alongside the away kit, after they were both presented by Nike at a glamorous brand event in New York, USA back in February, alongside the latest attire for South Korea and America.

NFF top shots are now hopeful that the new range will be as successful as the outgoing ones, for which Nike received three million orders prior to the release of the jerseys into the market on 29th May 2018; with more purchases made on the first day of the sales in London, 1st June 2018.

That provided a hefty boost to the NFF’s expected earnings from the three-and-half-year deal reached with the American sportswear company, which was billed to fetch $3.75m (743m Naira) during its three-and-half-year partnership and a $500,000 (99m Naira) bonus for reaching the 2018 World Cup.

Among other perks to the bargain, the contract was reportedly worth $750, 000 (148m Naira) in its first year and expected to rise to $1million (198m Naira) each year from 2016 till 2018; after which a fresh package was made public on November 22, 2018 at Stephen Keshi Stadium, Asaba just before a friendly game between the Eagles and Cranes of Uganda.

The onus has now fallen on 20-year-old Ajibade, who now plays for Avaldnes of Norway, to showcase the attractive home and away jerseys as well as Agbada casual wears that were all specially designed for Nigeria by Nike.

The petite attacker-cum-winger took to social media to reveal her thoughts about the onerous assignment she undertook in unveiling the new jersey, which she said make her proud to be a Nigerian and she would love to wear the new attire with dignity in bringing more glory to the country.

Ajibade stated alongside links posted for details about the new attire: “I’m excited to launch the new Nigeria kit. So proud to be a Nigerian EagleFlag of Nigeria @nikefootball #YouCantStopUs. Home https://go.nike.com/051i4o52etC. Away https://go.nike.com/ZLyb6paKbCz. #RASH #TheGirlWithTheBlueHair Blue heart.”