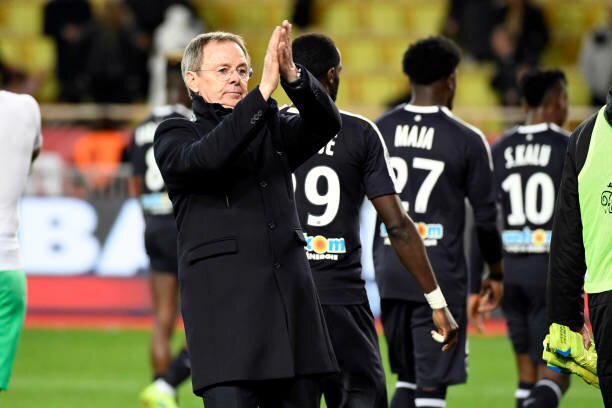 Eric Bedouet head coach of Bordeaux during the Ligue 1 match between Monaco and Bordeaux at Stade Louis II on March 9, 2019 in Monaco, Monaco. (Photo by Pascal Della Zuana/Icon Sport via Getty Images)

The presence of Samuel; Kalu at Girondins-Bordeaux of France has been fingered as the major reason why former Sunderland of England striker, Josh Maja found it easy to settle down fast at the French Ligue 1 club, megasportsarena.com reports.

This is the down-to-earth assertion of Super Eagles’ coach, Gernot Rohr, who said he is happy to see Maja in top form at one of the clubs he also played for during his heyday, but he is quick to add that fellow-Nigerian national team star, Kalu made it easier for his compatriot.

Rohr went on to heap praises on both players, with a view that Kalu keeps showing how much of a team player he is, while Maja has become a very versatile lad, who is capable of playing in three offensive positions – wing, midfield and attack.

Although Maja has a single national team cap to his name, which came when he replaced Victor Osimhen in the closing minutes of Nigeria’s 2-2 draw with Ukraine in September, Rohr appears to be tipping the lad for a bright future ahead, as an arrow head or support striker in his team.

Maja, who romped home a hat-trick last weekend in Ligue 1, now has four goals and two assists from eight matches he has featured in since his arrival from The Black Cats in England, where he was top scorer for the club in the lower division English Championship.

With the buzzing striker now in his element at Bordeaux, Rohr is not one to forget the role Kalu played in helping Maja settle down quickly at the club, where he had to overcome an initial dip in form and lack of familiarity, after his arrival in the January transfer window.

Rohr recalled: “When he arrived in Bordeaux, he was not alone: there was another Nigerian, Samuel Kalu. So, his integration, carried out in good working conditions and surrounded by a good staff, was facilitated.

”It could only move in the right direction. He was on our list of players to watch, he was already attracting our attention, although he was only playing in League One, because our scouts were studying him closely from England.

”This is not a chance, he seized his chance with the various injuries of his teammates, and his hat-trick is part of the progression he displays. Above all he is quite versatile, on the offensive side: he can play at the three front positions, in a system with two or three attackers.”