Osimhen Cleared For Lille’s Match On Saturday, Misses Next Against PSG 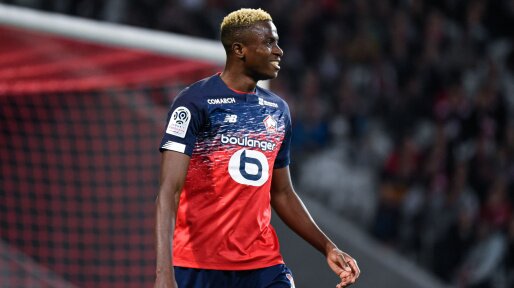 Lille Metropole of Franc e striker, Victor Osimhen has been cleared for Ligue 1 action against FC Metz this weekend, but will miss the next clash, a mouthwatering high-profile fixture away to Paris Saint-Germaine, after the international break, megasportsarena.com can report.

In an uncanny play out of the rules, Osimhen will serve a game’s suspension for accumulated yellow cards, but it will not start this weekend, until he returns from international duty with the Super Eagles, and he will not be in Lille’s squad away to PSG at Parc des Princes on November 22.

Lille confirmed Friday that Osimhen is expected to feature for The Great Danes when they battle Metz at Stade Pierre-Mauroy, but will miss their next game after the international break, against the Paris-based French league leaders on November 22.

Osimhen has established himself in France since his arrival from Sporting Charleroi of Belgium in July, scoring nine goals across all competitions, including seven in the French top-flight, but the 20-year-old hitman is also guilty of receiving three yellow cards in less than 10 games in Ligue 1.

After netting his first away goal on Tuesday in the UEFA Champions League, but his side lost away to Valencia of Spain, Osimhen will be looking to rediscover his accuracy in Ligue 1 this Saturday against Metz, as his last goal in the domestic championship came against Nimes on October 6.