Osimhen Not For Sale, Value Intact At Lille, Despite His Missed Penalty 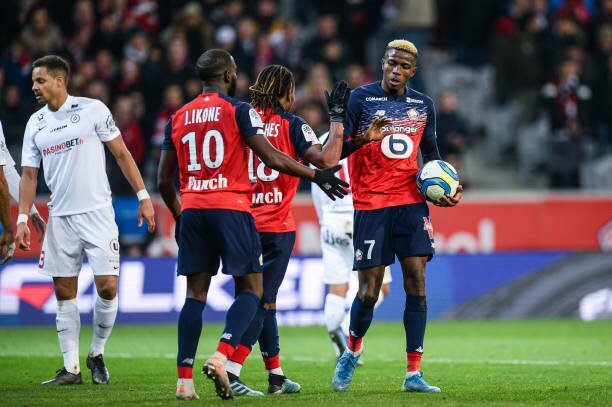 Jonathan IKONE of Lille, Renato SANCHES of Lille and Victor OSIMHEN of Lille during the French Ligue 1 soccer match between Lille OSC and Montpellier HSC at Stade Pierre Mauroy on December 13, 2019 in Lille, France. (Photo by Baptiste Fernandez/Icon Sport via Getty Images)

Lille Metropole of France striker, Victor Osimhen’s value has not diminished at the French Ligue 1 club, despite his missed penalty at the weekend, as the club’s coach, Christophe Galtier and president, Gérard Lopez are still talking about him as a credible asset for the team, megasportsarena.com reports.

While Galtier stressed that Osimhen remains the team’s number one penalty kick taker, in spite of the missed effort in their 2-1 win against Montpellier, the club present stressed that the Super Eagles’ striker is not for sale and no offer will be welcome for him next month.

Ahead of the January transfer window in the coming weeks, Lopez made it clear that he is not thinking of any deal that would take Osimhen away from Lille, and buttressed his declaration by stating categorically that he will not sanction a sale even in the summer transfer window.

With 11 goals in 21 matches across all competitions, the former VfL Wolfsburg of Germany and Sporting Charleroi of Belgium striker has proved that he is not a one-season wonder, such that even Lopez admits he is not surprised that Osimhen continues to be linked with a departure.

Some forecasts even state that Osimhen will leave Lille as early as January, with reports stating that Barcelona of Spain are already targeting him as a replacement for Luis Suarez, while Arsenal and Liverpool are also said to be keen on buying the Chile 2015 FIFA U-17 World Cup top scorer.

However, Osimhen is under contract with Lille until the summer of 2024, after the ambitious club bought him for €12m from Charleroi in August, such that Lopez stressed they want to try as much as possible to keep the in-form lad for the long term, hence his verdict that the rookie lad is not for sale at any price next month or even in the summer of 2020.

Lopez told le10sport.com: ”The goal would be, for example, to keep Victor Osimhen another year. We cannot say that the LOSC is a club that has no ambitions and just trades. We have refused many important offers because we have important sporting ambitions, but people only see the departures.”

On his part, Galtier stressed that Osimhen remains the team’s number one penalty kick taker, despite seeing the lad involved in an on-field debate with Jonathan Ikone during the first half of their Ligue 1 clash with Montpellier on Friday night.

Five minutes before half-time, Ikone stepped up to convert a spot-kick won by Osimhen, which did not please Lille’s captain, Jose Fonte and Galtier, who both felt there should be no debate over who takes it, with the coach even sticking to his view after the chance was later wasted.

Galtier explained: ”I saw what happened and I’m going to talk about it with the players. In the last match against Brest, Victor gave Jonathan (Bamba) the chance to shoot, it was a gift.

”This is something I am going to intervene on because there were far too many people around the ball; it can confuse the taker at some point. So now, is there going to be a fourth, a fifth, or even a sixth taker? Victor remains the number one penalty taker.”