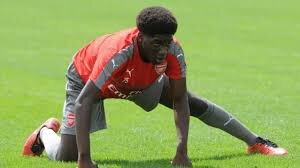 Arsenal of England youth team midfielder, Tobi Omole has been served an official exit date of July 1st from the London-based club, and is bound to immediately commence looking out for a new employer in the summer transfer window, megasportsarena.com reports.

Despite having come very close to sealing a place in The Gunners’ main team in recent years, following appearances in training with the senior squad and equally being part of some of their provisional lists for matches, Omole has surprisingly been told to leave Emirates Stadium

Omole, who was born to Nigerian parents in London, joined Arsenal’s academy in 2014 after he was spotted by The Gunners’ scouts while playing for Thamesmead, and the 20-year-old box-to-box midfielder, who can also feature as a central defender and left-back, grew rapidly through the ranks; with his biggest leap being named to their Europa League squad for the 2019/20 term.

However, Omole is now set to depart Arsenal at the end of this month, after making a total of 16 appearances in the Premier League 2 and featured for The Gunners’ youth team in the U18 Premier League, Premier League International Cup, EFL Trophy and FA Youth Cup.

He was one of Arsenal’s first year scholars for the 2016/17 season and seemed to have sealed a long term future with the North London club when he signed his first professional contract with the team in August 2018, but he has now been told to move on.