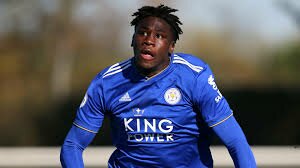 Glasgow Rangers of Scotland midfielder, Joe Aribo will have the pleasure of playing alongside another Nigerian-born player at the Scottish Premiership club, as The Gers have announced the arrival of Calvin Bassey into their mainframe, megasportsarena.com reports.

Aribo already has former Liverpool of England winger, Sheyi Ojo among his colleagues at Ibrox, where Sadiq Umar and Ovie Ejaria also once toiled to make their mark, with Bassey now adding to the long standing tradition of the Glasgow-based side signing players with origin from the West African nation.

The latest lad with Nigerian blood in his veins arriving at Rangers is Bassey, a 20-year-old full-back, who joins forces with Aribo’s club on a pre-contract deal from Leicester City’s youth team, after he agreed a four-year contract with the Scottish Premiership side, upon their acceptance of a proviso binding them to pay training compensation to the Premier League club.

Bassey, who was born in Italy, but is still eligible for Nigeria and England, will officially make the move to Aribo’s team when the transfer window opens , much to the delight of The Gers’ boss, Steven Gerrard, who told Rangers’ website: “There was a lot of clubs interested in Calvin and for us it’s pleasing to secure the services of another young talent.

“He’s a strong and dynamic athlete, who is very much the modern day full-back. He will develop further and we are excited to have made another strong addition to our group. He’s left-footed, physically powerful, enjoys driving forward and is certainly equipped to thrive in the combative nature of Scottish football.”

Bassey said in response: “I am delighted to join Rangers and secure my future at a club of such stature. I have heard about the amazing atmosphere at Ibrox. I can’t wait to start pre-season and take my career to the next level in the famous blue Rangers jersey.”