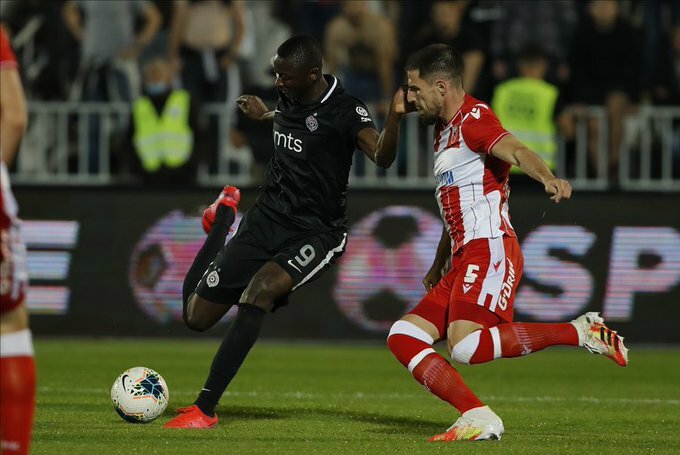 Partizan Belgrade of Serbia striker, Sadiq Umar is attracting interesting transfer attention from four top clubs across Europe, as AC Milan of Italy and Manchester United of England as well as Besiktas and Fenerbache of Turkey are in the race to hook his signature megasportsarena.com reports.

The 23-year-old Rio 2016 Olympic Games bronze medalist, who is valued at around 15 million Euros by Partizan, has been in top form so far this season, with 12 goals and 13 assists so far this season, and he is now bound to get due reward for his efforts.

Just this past Wednesday, Umar, who played on loan from AS Roma of Italy as Glasgow Rangers of Scotland before joining Partizan, got another assist that helped his side advance to the final of the Serbian Cup, at the expense of their local rivals, Red Star Belgrade.

Dramatically, aside reported interest in him from Milan, Manchester, Besiktas and Fenerbache, the trio of Valencia of Spain as well as CSKA Moscow and Spartak Moscow of Russia are also said to be interested in joining the hunt for his services, after watching him in the Belgrade derby.

Details of the report by Futbol Arena noted that it could be another big move in less than two years for Umar, who has also played for Spezia and AS Torino of Italy, as well as NAC Breda of Holland, but is enjoying the best time of his professional career so far at his current base.

A post via @owngoalnigeria added hint of a long-awaited invitation to Nigeria’s senor national team for the in-form striker, as the entry read: “17 Goals, 17 Assists – Sadiq Umar Wows Rohr With Man Of The Match Display In Biggest Game In Serbia.”

“Telegraf reports scout Budimir Vujacic attended the Belgrade derby last night to watch the 23-year-old. Sadiq burst onto the scene with Roma before spending time with Rangers last season. Partizan have since signed him permanently from Roma after a loan spell of 11 goals in 18 games.”