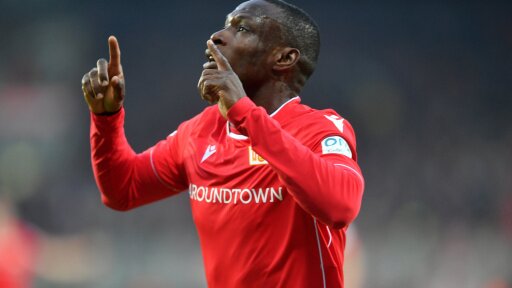 FC 1. Union Berlin of Germany striker, Anthony Ujah is eagerly anticipating another huge outing with his club this weekend in the German Bundesliga, as they will line out against one of his former clubs, FC Cologne, and he is determined to make his impact felt decisivelyV megasportsarena.com reports.

After helping his side pull off a 1-1 draw last weekend with a crucial assist, Ujah is blowing hot once again, and he believes Saturday’s game against Cologne would accord him another chance and opportunity to show his top form for his club’s fans and the management.

As he prepares to tango his former teammates, including new Super Eagles’ invitee, Kingsley Ehizibue, Ujah admitted he has fond memories of his time at Cologne, who also once had former Nigeria captain and head coach, Sunday Ogorchukwu Oliseh on their cards.

However, despite admitting a deep level of nostalgia about his days with Cologne, Ujah stated tersely that his immediate plan is to take the opponents to the cleaners this weekend, even as he admits he is planning to live in the city after ending his playing career.

The 29-year-old striker, who first made his name at Lillestrom of Norway, before also plying his trade with Werder Bremen and SV Mainz of Germany as well as Liaoning FC of China, recalls how he spent three years with The Billy Goats, which he first joined on loan in the summer of 2012.

After sealing a full contract the following season, the Warri Wolves of Delta State product struck 32 goals in 102 appearances across three seasons for Cologne, who he is now relishing the chance to floor on Saturday when Union Berlin visit them at RheinEnergieStadion.

Ujah, who has started only eleven matches in all competitions for his Berlin-based side, told German publication, Kicker: “In Cologne I had my best time in football so far, the city is very important to me. I see my future there.”