Hakeem Olajuwon Cited In Roll Call Of NBA’s Iconic Players With Jersey No.34 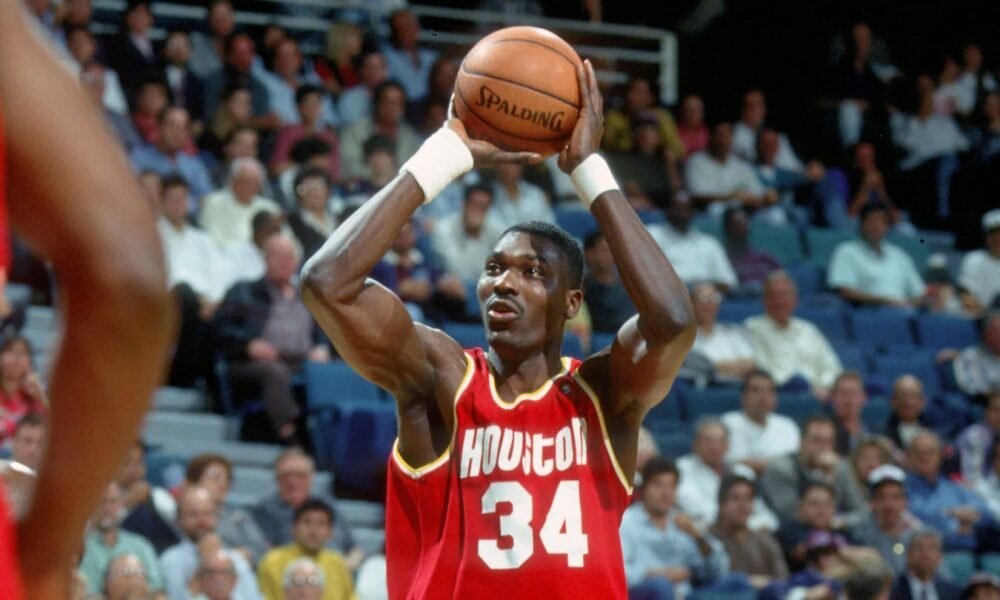 Retired Nigerian basketball legend, Hakeem ‘The Dream’ Olajuwon has been cited in a roll call of the most iconic players to don jersey number 34 in USA’s National Basketball Association (NBA) league, megasportsarena.com gathered.

Olajuwon is named along with Shaquille O’Neal and Charles Barkley in the old brigade of stars to make 34 vastly popular on the back of their tops, while Nigerian-born reigning most valuable player, Giannis Adetokunbo (Antetokounmpo) is listed for the present generation dazzlers.

Olajuwon and Antetokounmpo are named along with Barley and O’Neal in proving that certain NBA jersey numbers have become synonymous with championship titles, MVP awards, team victories and spectacular scoring feats, amidst a selection of the league’s most iconic figures.

While Olajuwon made his mark several years ago with Houston Rockets, Antetokounmpo is doing his thing with Milwaukee Bucks, and he will continue targeting more epochal exploits, in order to match or better the achievements of the NBA’s old legends over the next few seasons.

He may, however, have a very tough nut to crack when it comes to trying to equal the marks of fellow-Nigerian-born ace, Olajuwon, who first starred for the national team of the country of his birth then naturalized to feature for America at the Olympics, and his feats stand deeply etched into the sands of time.

A citation for ‘The Dream’ read: “During his 18-year career, Nigeria-born Hakeem Olajuwon staked his claim as one of the greatest players in NBA history. Long considered a physical marvel since his days at the University of Houston, his aesthetic and productive play – highlighted by his Houston Rockets’ back-to-back NBA titles – earned him a place among the game’s best.

“In 1993-94 he had a storybook season, becoming the first player to be named NBA MVP, NBA Defensive Player of the Year and NBA Finals MVP in the same season, a feat only previously achieved by Michael Jordan.

“The following season he rallied the Rockets from a sixth seed in the playoffs to their second straight NBA crown, making Houston the fifth NBA franchise ever to win back-to-back titles. Drafted No 1 overall in 1984, Olajuwon finished second to Michael Jordan in Rookie of the Year voting in 1985 after putting up 20.6 points and 11.9 rebounds.

“The next year, as part of the Rockets’ Twin Towers line-up alongside the 7ft 4in Ralph Sampson, he powered the Rockets into the 1986 NBA Finals, where they fell to Larry Bird’s Boston Celtics in six games. Olajuwon’s production simply increased as he developed into one of the game’s top big men.

“He led the Rockets in 13 statistical categories, including scoring, rebounding, steals and blocked shots. He began a string of selections to the All-NBA First Team (1987 to 1989) and NBA All-Defensive First Team (1987, 1988 and 1990), and was the starting center for the Western Conference All-Stars four years in a row (1987-90).

“In 1989 he became the first player to finish among the league’s top 10 in scoring, rebounding, steals and blocked shots for two straight seasons. That same year against the Milwaukee Bucks, Olajuwon had 18 points, 16 rebounds, 11 blocks and 10 assists, recording the rare quadruple-double. He also led the NBA in blocked shots in 1989-90 with 4.59 per game and in 1990-91 at 3.95 per contest.

“Olajuwon became a naturalised US citizen in April 1993 and finished second to Charles Barkley in MVP voting shortly afterwards, He raised his game once more in the 1993-94 season, introducing a new line of spins, fade away shots and jumpers that made virtually unstoppable on offense.

“The man nicknamed ‘Hakeem the Dream’ had now developed a set of patented moves involving great footwork with ball and head fakes with either his back to the basket or facing opponents abusing defenders. All of which became known as the ‘Dream Shake’.

“In that memorable 1993-94 season, Olajuwon won both the league and NBA Finals MVP awards while leading Houston to their maiden NBA championship. The Houston center also earned his second straight NBA Defensive Player of the Year award.

“The Rockets won the title after a grueling seven-game defeat of the Patrick Ewing-led New York Knicks. Olajuwon was simply brilliant in the Finals, contributing 29.1 points, 9.1 rebounds and 3.9 blocks per game.

“In the 1994-95 season, Olajuwon posted had a career-best 27.8 PPG along with 10.8 RPG. He also became the Rockets’ all-time leading scorer when he passed Calvin Murphy early in the season. In February, Olajuwon was reunited with college team-mate Clyde Drexler, who came over from the Portland Trail Blazers in a trade for forward Otis Thorpe.

“In the playoffs, Olajuwon averaged 33.0 points and demolished 1995 MVP David Robinson and the San Antonio Spurs in the Western Conference Finals. Then in the 1995 NBA Finals, Olajuwon and the Rockets met the Orlando Magic and the league’s great young center, Shaquille O’Neal.

“The two big men had similar numbers as Olajuwon averaged 32.8 points, 11.5 rebounds and 5.5 assists to O’Neal’s 28.0 points, 12.5 rebounds and 6.3 assists. But the Rockets swept the series, making Houston the fifth NBA franchise to win back-to-back titles. For his spectacular play, Olajuwon was awarded his second consecutive NBA Finals MVP award.

“Though he remained productive in the next two seasons, injuries impacted the latter stages of Olajuwon’s career. He retired in 2002, aged 39, having left Houston after 17 seasons for a one-year stint with the Toronto Raptors. In 2008, Olajuwon was inducted into the Basketball Hall of Fame. His old rival Ewing was part of the class, too.

“Following his playing days, Olajuwon spent many NBA off-seasons teaching some of the league’s young stars – from Kobe Bryant to Dwight Howard to Amar’e Stoudemire – ways to improve their footwork in the post.”