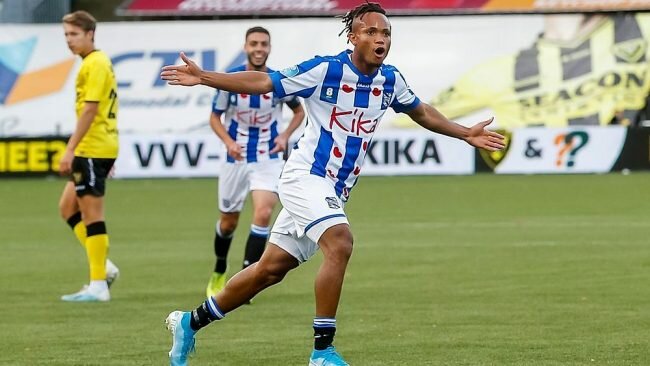 SC Heerenveen of Holland winger, Chidera Ejuke led the way for a rain of goals from old and young Nigerian players – while others hit varying headlines – on another weekend out action across Europe and Asia, megasportsarena.com reports.

Ejuke set the ball rollyng when he was again on song for his club in a pre-season game, but his effort could not save them from losing 2-1 at home against fellow Dutch Eredivisie outfit, Vitesse Arnhem.

Despite gritty efforts from Ejuke and his teammates, Vitesse shot into 2-0 lead after 15 minutes and the former Flying Eagles’ invitee could only pull one goal back just before half time but the youngster, who has been valued at 10m Euro by the club, could not get a much-need equalizer, while fellow Nigerian midfielder, Hamdi Akujobi was introduced to the game in the 36th minute.

In Italy, Joel Chukwuma Obi got an assist for Chievo Verona to help The Flying Donkeys snatch a 2-0 win over Spezia in the first leg of their promotion play-off semi-finals clash, a day after they overcame Empoli in the previous round.

The former Super Eagles midfielder started in the heart of the midfield for the hosts, who were hoping to stretch their unbeaten run to five since their last defeat during the regular season in the Italian Serie B and they needed just two minutes to score two goals.

The first came when captain of the side, Filip Dordevic fired them ahead after just 90 seconds before Obi then produced a dashing run on the flanks seven minutes later to set up Jacob Segre to make it 2-0; giving them a good cushion heading into Monday’s second leg.

Obi, who looks good to become the next Nigerian player, after Crotone’s Simeon Tochukwu Nwankwo (Simy), to gain promotion to the Italian top-flight, was on for the entire duration of the game, in which he got a rating of 7.6, made three key passes, completed 75% of his passes, won 10 duels and achieved five crucial clearances.

In Slovakia, Rabiu Ibrahim scored once for league and cup winners, Slovan Bratislava in their 5-0 victory over Nitra on the opening day of the season, as the 29-year-old former Golden Eaglets’ dazzler netted his club’s second goal after 37 minutes.

In Japan, 36-year-old Peter Utaka scored four goals for Kyoto Sanga in a 4-3 victory away to Montedio Yamagata at ND Soft Stadium, where his goals came in the 31st, 37th, 53rd and 87th minutes.

Utaka, who emerged the top scorer during his time with Royal Antwerp of Belgium, Odense of Denmark and Sanfrecce Hiroshima of Japan in 2008, 2010 and 2016 respectively, had already scored nine goals in his first ten appearances for Kyoto Sanga.

In Latvia, Valmiera FK youngster, Tolu Arokodare continued his fantastic form in the Virsliga when he scored his first career hat-trick to help his side move up to third position on the log, sequel to a 3-2 win away to FK Tukums.

Arokodare, who is currently topping the Virsliga highest scorers’ chart with 12 goals from 13 starts, opened scoring in the 5th minute, with his second coming in the 62nd minute and then he eventually hit his treble in the last minute of play.

Emeka Basil initially Basil equalized for FK Tukums with a ferocious effort in 20 minutes to make it 1-1 at a point during the game at Tukuma Stadium, where Olaide Badmus, Olabanjo Ogunji and Pam Samuel were also involved in the game that saw six Nigerians players on parade.

While all the Nigerians on display put in their best efforts all through the encounter 19-year-old Arokodare was the standout star and now has 12 goals from 12 games this season making him the league most lethal forward after 13 rounds.

Also in Latvia Idowu David Akintola and Joshua Akpudje continued their center-back partnership for BFC Daugava Daugavpils as they helped their side snatch a huge 4-1 victory away against FS Metta LU.

Akintola headed home five minute after the half-hour mark to give his side a 1-0 lead going into the half time break, after which four more goals in the second half ensured the Nigerian pair maintained their unbeaten run to four games as they moved up to fifth on the standings.