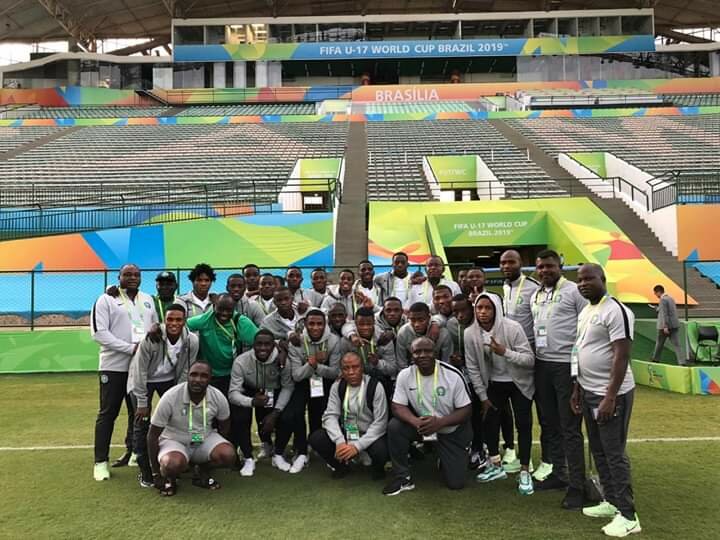 One of the players that was dropped from the Golden Eaglets’ squad to this year’s FIFA U-17 World Cup in Brazil, Alfred Olatomi Olaniyan was among the array of personalities who gathered Thursday evening at Murtala Mohammed International Airport, Ikeja, Lagos to welcome the largely-disappointing squad back home.

Olaniyan disclosed that he could not make the trip to Brazil for the competition because he was injured, admitted that the team performed below expectation during the competition, but added that all the players gave the best they could.

The youngster, who is attracting interest from Manchester City and Arsenal of England got top marks during the African U17 Cup of Nations in Tanzania, but was dropped from the squad to Brazil 2019 after failing to recover from a knee injury.

The Eaglets, who crashed out fo the Cadet Munail in The Samba Nation after losing 3-1 to Holland in the round of 16, boarded a plane, with flight number G3 1853, from Goiana to Sao Paulo on Wednesday afternoon, 1205 hours local time and the flight time was one hour and forty minutes.

Megasportsarena.com further gathered that, in Sao Paulo, the Eaglets switched flights to South African Airways with flight number SA 223 and departed Brazil at 1730 hours, after which the plane landed in Johannesburg Thursday afternoon, at approximately 1500 hours local time.

A South Africa Airways plane with flight number SA 60 then touched down at MMIA in Lagos at 1950 hours, with Olaniyan among the lot who welcomed the players and coaches back home.

Olaniyan told allnigeriasoccer.com ”It wasn’t too good for the team in the Brazil but they did their best. The captain Samson Tijani, Akinkunmi Amoo and Ibrahim Said were the three players that impressed me the most. I didn’t go for the tournament because I was injured, I had a little knee injury so the coaches did not want to risk taking me.”