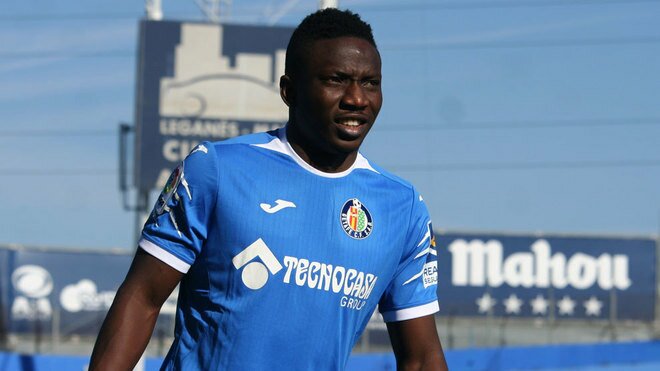 The much expected clash between Oghenekaro Etebo and former Super Eagles’ winger, Victor Moses in the UFEA Europa League will not take place after all, as Getafe of Spain have refused to make the trip to tango Inter Milan in Italy, megasportsarena.com reports.

While doubt had already hung over the possibility of Moses playing in the match, considering the player on loan from Chelsea of England to Inter Milan is still undergoing recovery from a muscle strain, Etebo too will not have the privilege of playing for Getafe in what could have been a high-profile game against the former European champions at The San Siro.

Etebo’s aspirations for another outing in Europe’s second tier clubs’ competition came unstuck, after Getafe confirm that they will not travel to Milan for Thursday’s Europa League clash with Inter due to concerns about the widespread coronavirus outbreak in Italy.

Dramatically, Etebo’s club went on to state that they will not make the trip even if it means they end up losing the tie by default, despite being assured that the match in Milan would be played behind closed doors, thereby ruling out intense contact among fans, had they been present.

Etebo will now spend all of Wednesday anxiously waiting for UFEA’s response, after Getafe’s president, Angel Torres said he and his colleagues in the Spanish club’s management must consider the health of their players and coaches, rather than allow them take a risk in the game.

This is based on their observation that the region of Lombardy, where Inter are based, is at the epicentre of Europe’s worst coronavirus outbreak, which has prompted the Italian government to impose a nationwide lockdown on the entire country.

Italy, which has the highest number of reported cases outside of China, has more than 10,000 infections and 631 deaths, while Milan had witnessed a lot of earlier restrictions, among which was the stadium, which was closed to fans’ attendance to limit the spread of Covid-19.

However, Getafe face being thrown out of the competition, as the match remains scheduled by UEFA, despite an announcement on Monday that all Italian Serie A games have been suspended until at least April 3, with the Italian football federation having since admitted that the season may not be completed because of the virus.

Torres told Onda Cero radio: “It would be great to play the tie against Inter and we were very excited as a club and a fan base, but if that can’t happen and we have to lose the tie, we’ll do so with our heads held high. We can’t play in those conditions. Health comes above everything and if a game isn’t played or can’t be watched, we’ll take part next year instead if they let us.

“The Italian government has banned its own competition out of fear of further spread of the disease. The Spanish government, which is what we have to follow, has banned return flights between Spain and Italy. If we were to put ourselves in the firing line by playing there, it would be a contradiction that doesn’t make any sense.

“I think they [UEFA] have been sleeping on their laurels. There are people who are scared of UEFA, but I’m scared of the people close to me contracting this disease by going to the main epicentre of it where 262 people have died in two days.

“If we put ourselves in the firing line, contract the disease and come back, the Spanish league would have to be suspended. That’s not that we need. We might ask the Spanish Football Federation to intervene, but I don’t know how much influence they’ll have over there.”