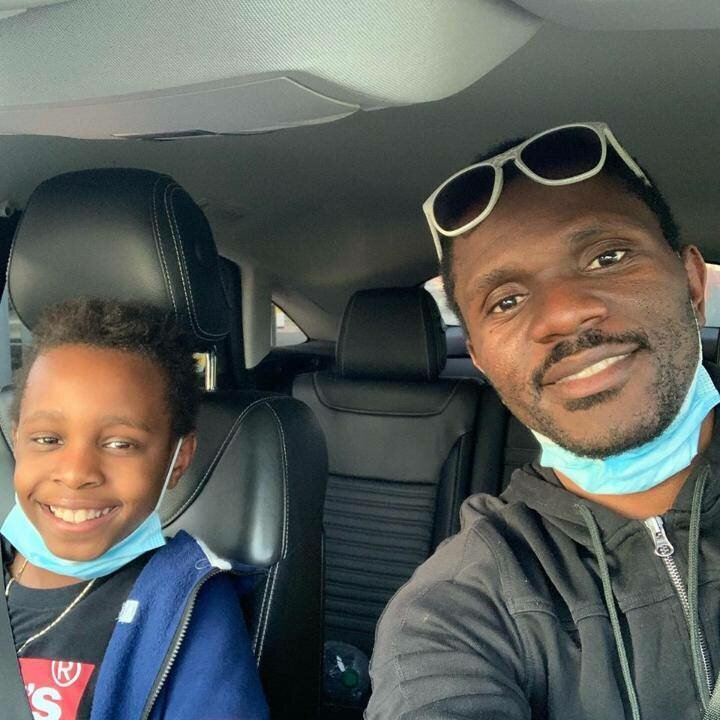 Former Super Eagles’ striker, Stephen Ayodele Makinwa (Tiger of Lagos) is relishing the opportunity he had to drive hs son around town this week, following the easing of lockdown regulatons and reduction of restriction rules that had been imposed by the government of Italy at the height of the novel coronavirus pandemic in the country.

Megasportsarena.com reports that, in order to show how delighted he is with the eased lockdown across the Italian peninsula, Makinwa, who is now a fast-rising footballers’ agent based in Rome, Italy, decided to take a drive round town along with his son, Michael (aka Mickey).

The ex-international, who played for 11 clubs in Italy as well as gained short spells in Greece and Slovenia before eventually calling it quit with the round leather game in 2014, admitted it was a huge relief and great pleasure for him being able to be at the wheels again, following several weeks of total lockdown across The Land of The Azurri.

The 37-year-old Makinwa, who has successfully sealed mammoth deals for Eddy Ogenyi Onazi, Stanley Amuzie, Blessing Eleke, Musa Mohammed, Ezekiel Henry (Henty) and Simeon Tochukwu Nwankwo among many other top players, admitted via social media that he is glad to finally get the chance of overcoming boredom caused by stay at home restrictions caused by coronavirus.

With Italy turning out to be Europe’s worst hit country in terms of deaths from COVID-19, it was a strict adherence to staying at home and other self-isolation rules that everyone in the country was forced to abide with, and they ended up stuck indoors for almost three months.

However, with the restrictions now relaxed and life gradually returning to normal, even with the top-flight league, Serie A, also looking good to return early next month, it is time for celebration for Makinwa, who shot to limelight during the 2004 Nelson Mandela Challenge, when he scored Nigeria’s only goal in a 2-1 loss away to south Africa.

That feat took him into the ilk of players that scored on their Super Eagles’ debuts, but injury soon pout paid to all hopes of excellence held by the tall striker from Ile-Oluji in Ondo State, as the only other goal he ever scored for Nigeria was in a rain-soaked and waterlogged qualifier against Lesotho in Warri, Delta State.

The highlight of his days in the national team was featuring at the 2006 Africa Cup of Nations in Egypt, but his follow-up outing at Ghana 2008 was riddled by injuries and, from that point on, it was downhill all the way for the soft-spoken attacker, who played for Colegniano, AC Regianna, Palermo, Atalanta, Modena, Como, Genoa, Chievo Verona, Regina and SS Lazio, all in Italy.

Lazio turned out to be his last big-time club, as he suffered a stillborn loan deal and half a season at Larissa of Greece, who cut short the agreement on an excuse that he overstayed his Christmas holiday with his family back in Italy, and the striker promptly dragged them to court.

He then found some room for the twilight of his career at FK Gorica of Slovenia, where he went onto hit some epochal marks in the PrvaLiga, despite netting only two goals in all competitions, but one of them came in the Super Cup against Maribor, following another short stint in China.

However, the best days for the product of Obele High School, Frankelson United FC and Farmers Football Academy, all based in Surulere area of Lagos, were at Lazio, where he got the pleasure of playing continental soccer with the two-time Serie A champions.

The ex-striker-turned-super-agent, who also played for National Grassroots Dream Team, Taribo West’s Tamuno Inaemi Nationale of Ikeja and FC Ebedei of Sagamu, before travelling to Italy on the cards of Barrister Churchill Oliseh, returned to Lazio after his stops in Greece, China and Slovenia, but things never turned out as sweet as they had previously been.

After getting another spell on loan at a lower division side in Italy, Makinwa eventually called it quit with the round leather game, but he ended on a high with all his kids as Italian citizens, a permanent home in Milan, a booming business for his wife, citizenship for his children that were born in United States of America and a FIFA players’ agent’s license for himself.

The former striker has now taken his thoughts to the present, as he recalls how tough and monotonous life became during the coronavirus lockdown in Italy, then took to social media to celebrate the steady return to normalcy, while also celebrating his son, Ayokunle Michael Makinwa, who has already started showing his soccer skills in Lazio’s youth sector.

Makinwa added that he was excited with the opportunity he had in taking a drive with his son, who he also later videoed showing his soccer skills inside a safety net in their garden at home, and the ex-striker posted: “Boredom drive with Mikey 😀😃😎 @ Rome, Italy.”