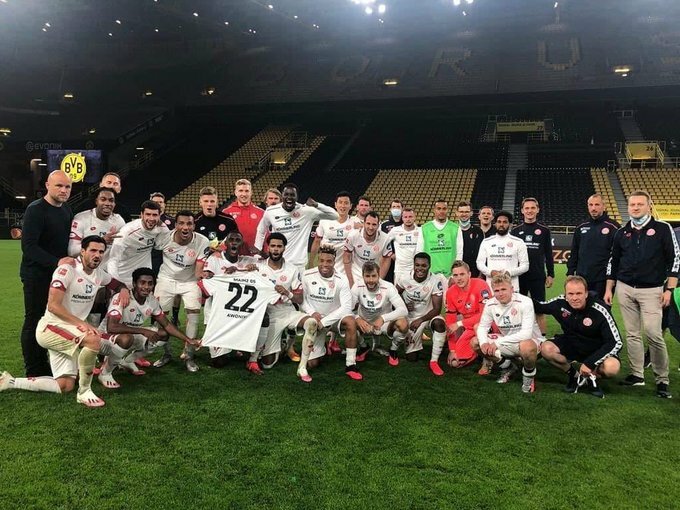 Awoniyi will have to miss two matches in order to fully recover from the concussion he suffered on Sunday, after a clash of heads with Augsburg’s Nigerian-born defender, Felix Uduokhai, and he started with his absence from Wednesday’s trip to Dortmund.

In Awoniyi’s absence, Mainz took a huge step towards securing their Bundesliga status for another season as goals from Jonathan Burkardt and Jean-Philippe Mateta saw them beat an out-of-sorts Borussia Dortmund at the Signal Iduna Park.

However, it was scary earlier on for Awoniyi’s side, as Dortmund enjoyed up to 80 per cent of ball possession, but they failed to trouble a well-drilled Mainz backline, even as Axel Witsel had an effort blocked after being teed up by Raphael Guerreiro, while the Portugal international also had a half-chance after some neat interplay with fellow wing-back Achraf Hakimi.

Pierre Kunde had the first sniff for the visitors, but was let down by his touch inside the Dortmund area after a clever ball over the top from Danny Latza, and Burkardt should then have done better when he was released by Mateta – getting his legs in a tangle as he tried to sneak past Hakimi.

The 19-year-old made up for it just after the half-hour, angling a header beyond Roman Bürki from Ridle Baku’s inch-perfect cross to put Mainz ahead. Despite a front three of Jadon Sancho, Thorgan Hazard and Erling Haaland, Dortmund continued to look toothless in attack.

Emre Can came closest to a BVB equaliser before the break, but couldn’t muster enough power to head past Florian Müller from six yards out, and things went from bad to worse for Dortmund at the start of the second half as Mainz were awarded a penalty.

Nigerian-born Austria international midfielder, Karim Onisiwo then unleashed a vicious long-range effort that Bürki could only parry, and Lukasz Piszczek tripped Latza inside the area as he looked to get to the rebound, as Mainz took control of the game.

Seconds after forcing a fine save from Bürki himself, Mateta swept past the BVB keeper from the spot to put the relegation-threatened 05ers firmly in the driving seat and social media is now agog with how the squad have dedicated their amazing win to Awoniyi.

The post by @FootballKuli stated: “Its great to see the team mates of Taiwo Awoniyi @taiwoawoniyi18 @Mainz05en showing great love to him & wishing quick recovery last night. Great win at Dortmund @BlackYellow as well ..With two matches to go, will they beat the drop ?? #Bundesliga #KuliFootball #Passion.”