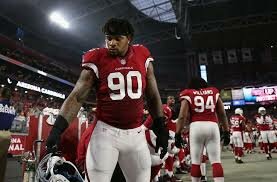 American National Football League (NFL) star, Robert Nkemdiche has been released b y a club in the championship for the second time this year, as Miami Dolphins have opted to finally drop the controversial Nigerian-born ace from their roster for the season, megasportsarena.com reports.

The Dolphins signed Nkemdiche in August after Arizona Cardinals released him after he showed up to training camp out of shape, but the last time he made headlines was on the negative level, as he was struggling to run basic warm-up drills with the team.

On Tuesday, the Dolphins gave up on Nkemdiche’s upside, releasing the former first-round pick, after he played just two games for the team that placed him on the active/PUP list after signing him to give him time to further work into game shape but, in August, he reportedly failed to run across the width of the field and back during a warm-up prior to a preseason game.

It marked the end of a promising romance, after The Cardinals selected the defensive tackle out of Mississippi with the 29th pick in the 2016 NFL draft, but he played 27 games over three injury-wracked seasons, with a torn ACL last December signaling the beginning of the end of his time in Arizona.

Born September 19, 1994, Robert Chukwudumebi Nkemdiche, a native of Loganville, Georgia, attended Grayson High School, where he was a three-sport athlete in football, basketball, and track, after which he attended University of Mississippi for three years until declaring early for the 2016 NFL Draft where he was picked 29th overall by the Arizona Cardinals.

Regarded by ESPN as the “Southeast’s best prospect since the early 1980s,” Nkemdiche was the highest touted American Football high school talent committing to the Ole Miss Rebels since Eli Manning in 1999.

He played as a defensive end and running back for the Grayson Rams high school football team. In his junior season, he registered 59 tackles and 18 sacks on defense while also running for 528 yards and scoring 17 touchdowns on offense.
Nkemdiche made his debut for Miami in Week 8 against Pittsburgh Steelers and played again Sunday against the New York Jets, but he then failed to record a defensive statistic and played just three snaps against New York after playing 15 against Pittsburgh.

Before joining Dolphins, he tallied 4.5 sacks and 44 total tackles with the Cardinals, who released the 2016 first-round draft pick after a “failed physical” designation with the move, according to the NFL’s transactions list.

The defensive lineman had been on the physically-unable-to-perform list after tearing his ACL in early December, but his rehab work had not been stellar, and when asked about an evaluation of Nkemdiche, The Cardinals’ coach, Kliff Kingsbury bluntly said “not in shape.”

The Cardinals had hoped they had gotten a steal when they took Nkemdiche 29th overall. Some thought he was a potential top 10 pick when he went into his final season at Ole Miss, but many off-field issues were apparent, as was a reputation of an inability to give consistent effort.

Nkemdiche played in just 27 of a possible 48 games in his three seasons with Cardinals, compiling 4½ sacks – all in 2018 – and 43 total tackles, but, while he had been due a $400,000 bonus for being on the roster on the fifth day of training camp, he was arrested twice in off-season for traffic and drivers license issues.