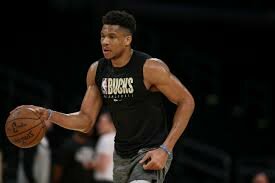 Milwaukee Bucks of America’s Nigerian-born star, Giannis Adetokunbo (Antetokounmpo) has been cited as a major threat for Boston Celtics, ahead of the clash between both sides on the second day of action in the restart of USA’s National Basketball Association (NBA)

The prestigious basketball league resumed on Thursday, after more than 140 days of slam-dunk action competitively, due to scourge of coronavirus, but the NBA has called some of the teams together for unprecedented one-leg matches at a single venue, and Antetokounmpo will step out with his team on Friday against Boston.

Megasportsarena.com can also report that Antetokounmpo had already displayed remarkable form that was evocative of his surge for a back-to-back conquest of the regular season’s most valuable player’s award before the 2020 campaign was halted on March 11 due to the coronavirus pandemic.

It is, therefore not out of place to rate him high as a star to watch out for, even as the like of LeBron James and Kawhi Leonard are also prime to explode during the novel schedule of games for the regular season and play-offs that will be completed with all games holding in what has been tagged ‘The Bubble’ at Walt Disney World in Orlando, Florida, USA.

To limit the number of personnel, in order to avoid any possible spread of COVID-19 at the venue, only 22 of the NBA’s 30 teams are taking part, while clubs with no chance of progressing to the post-season are not involved.

The new-look league is already on; with Los Angeles Lakers the number one-ranked team in the Western Conference, led by 35-year-old LeBron James, in his 17th season in the NBA and trying to win the title with his third team – having previously lifted it with Miami Heat and Cleveland Cavaliers.

There is also Kawhi Leonard, who was first a champion with San Antonio Spurs and last season with Masai Ujuri’s Toronto Raptors, also vying for a slice of history in winning the NBA gong with three different franchises.

The Nigerian link to the contest, though, is highlighted in these words by BBC Sport: “In the East the Milwaukee Bucks host the best record – as well as the best overall record in the league.

“Reigning Most Valuable Player Giannis Antetokounmpo is having another stellar season – but critics are still waiting to see if he can continue that form when it really matters, come play-off time. Listed at 6ft 9in tall and with a wingspan of 7ft 2in the ‘Greek Freak’ will be trying to secure the Bucks’ first Finals title since 1971.”