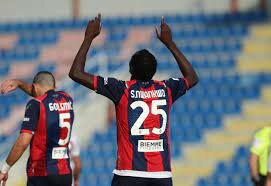 In what becomes another reward for his stunning form this season, in which he has notched a total of 19th goals for relegation haunted Crotone, ‘Simy’ could jolly well be on his way to Sampdoria at the end of the campaign.

This is sequel to a report by Italian sports daily, La Gazzetta dello Sport, which disclosed that former Chelsea and Leicester City of England as well as ex-FC Nantes of France gaffer, Claudio Raneiri is interested in signing the tall striker.

‘Simy’ has been one of the biggest revelations of Serie A this season, with his 19 goals in 33 games bettered only by Juventus’ Cristiano Ronaldo with 25 and Inter Milan’s Romelu Lukaku on 21 but, with Crotone doomed to relegation, The Sharks are willing to listen to offers for the tall lad.

Crotone’s need for a deal to the next bidder could also be enhanced by their knowledge that Simy will enter the final 12 months of his contract in July, such that the club may need to quickly sell the hitman that they bought from Portimonense of Portugal for 850,000 euro in July 2016.

Crotone’s coach has already admitted that ‘Simy’ will not go down with the club to Serie B even though he still has many years left on his contract there.

Aside interest from Sampdoria, another Italian side, Genoa and Besikta of Turkey, as well as clubs in France and Belgium, have also been mentioned in conection with the 28-year-old prolific scorer, whose transfer fee could be pegged at four million Euro.

However, with the high likelihood of a huge profit bound to come from any transfer that could be gained for Simy, whose market value keeps soaring with his remarkable run of goals this season in the Italian top-flight, Crotone are determined to squeeze out as much money as they can from his sale.

Consequently, the 28-year-old in-form striker is bound to go for much in excess of Crotone’s asking price of eight million euro, which Sampdoria have already hinted that they are ready to cough out, but Ranieri will have to offload some other players before funds will be available to sign Simy this summer.