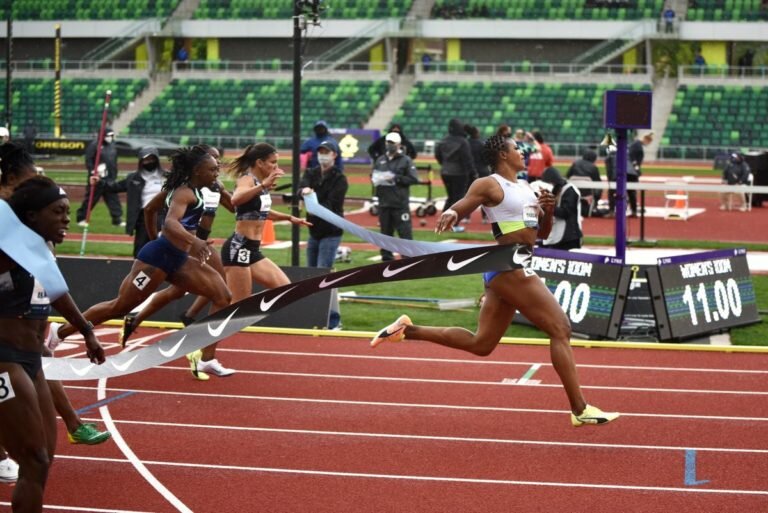 Megasportsarena.com reports that Okagbare revealed the depth of her joy, after she emerged fastest in her event at the competition in the United States’ city of Eugene.

In achieving her latest conquest on the tracks, Okagbare reached her season’s best as she clocked 10.97 and, though she had to observe social distancing with other competitors at the end of the dash, the Nigerian ace thanked them for giving her a good race.

The event was held in an impressively renovated arena that is gearing up to stage the World Athletics Championship next year, ahead of which Olympics women’s 400m champion, Miller-Uibo also relished the setting, as she beat runner-up Lynna Irby of the United States by more than a second with 2017 and left world champion Phyllis Francis back in seventh.

In a cagey race as rain started to fall over Hayward Field, the women’s 100m final was won by Okagbare with 10.97 (1.2), who warded off pre-race favourite, Britain’s Daryll Neita to third poition in 11.18 while Allyson Felix could only finish seventh.

The Beijing 2008 Olympic Games’ long jump bronze medalist and former African women’s 100m record holder admitted it was a huge boost for her getting back into the spotlight and she took to Twitter to celebrate her win and share visuals of the race.

Okagbare posted: “Your Girl doing what she does best at the 2021 World Athletics Continental Tour Gold series which kicks off with USATF Grand Prix at Eugene’s Hayward Field. Finished first at the Women’s 100m race in 10.97 secs. #ContinentalTourGold #USATF 💪🏽.”