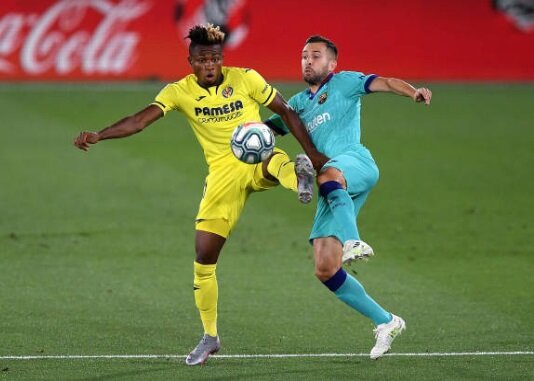 Villarreal of Spain winger, Samuel Chukwueze has stoked the embers of rivalry ahead of his side’s UEFA Europa League semi-finals’ clash with Arsenal of England by declaring that his target is to win the second-tier European clubs’ competition, megasportsarena.com reports.

Heading into Thursday’s semi-final first leg at home, Villarreal are backed by the fact that their coach, Unai Emery is a former handler of Arsenal and has a strong tradition of having won the competition three times at a stretch with Sevilla of Spain.

Emery also took Arsenal to the final two seasons ago, such that he is rated an expert of sort in the competition, and Chukwueze has now enthused that he has a strong chance of seeing his dream of winning the Europa League finally come true.

To achieve his dream of winning his first silverware in Europe, Chukwueze and his teammates have to see off Arsenal over two legs in the semi-finals before facing either Manchester United of England or AS Roma in the ultimate game.

Though the odds look daunting, an air of possibility is hanging round Chukwueze, who has a goal in this season’s Europa League and provided three assists in nine games, even as he prepares for his first match against Arsenal, some five years after his transfer deal with the north London club collapsed at the last minute in 2016, even after he passed a medical.

While many pundits are looking at the edge provided by Emery, who won the competition three times with Sevilla – 2014, 2015 and 2016 – while Villarreal reached have also the semi-finals on three occasions – 2004, 2011 and 2016 – Chukwueze is banking on personal hunger to achieve his aim.

Dramatically, while the first leg will hold this Thursday at Villarreal’s Estadio de la Cerámica, the second leg at Emirates Stadium on May 6 will be 16 days before Chukwueze’s 22nd birthday and the youngster, who now has three consecutive starts in the Spanish LaLiga, is beaming hot with great expectations.

Chukwueze, who has rediscovered his best form in recent matches, with three goals to show for it, and has achieved a decent run back in the starting line-up, which he had not managed since September, said on Livescore Challenge : “I would like you to tell me that I am going to win the UEFA Europa League, just tell me! I want to win the UEFA Europa League, thank you!”