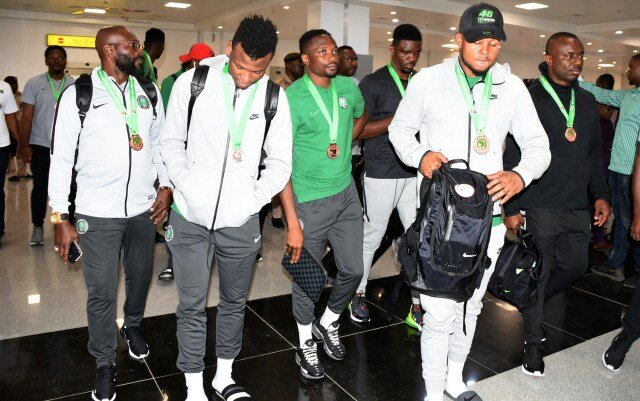 The Super Eagles’ camp will open on Sunday in Akwa Ibom State capital, Uyo, for the start of preparations for Wednesday’s first match of the 2021 Africa Cup of Nations qualifiers against The Squirrels of Benin Republic, megasportsarena.com reports.

Eagles’ coach, Gernot Rohr, who had complained about the limited time he will have in training with his 23 invited players was in Cairo, Egypt up till Saturday evening, as he opted to watch the under-23 team’s first match at the Africa U-23 Cup of Nations.

Rohr, though, had a rude shock in his travel plans, as the Olympic Eagles’ match against Cote d’Ivoire did not commence at 2pm as initially bandied in the press, but the 4pm kick-off meant he had to rush to meet his flight to Lagos.

The Franco-German gaffer will, however, hope to head back in time to receive his players, other crew members and backroom staff on their various arrivals billed for early Sunday, while preparations are expected to start in earnest the following day at the match venue, Godswill Akpabio International Stadium, Uyo.

The Eagles are scheduled to be camped at Le Meridien Ibom Hotel in the heart of the capital, while The Squirrels are expected to arrive from Cotonou on Monday.

Rohr will quickly take his mind off his trip to The Land of The Pharaohs, where he went to offer technical support to Olympic Eagles’ coach, Imama Amapakabo, as the embattled gaffer intensified effort to upstage Cote d’Ivoire in Saturday’s game.

However, the game was still goalless at half time, as Amapakabo’s starting line-up of Adamu, Godfrey, Anthony, Ndah, Sincere, Udo, Adam, Nwakali (capt), Muyiwa, Okwonkwo and Enobakhare, struggled to break down their stubborn West African rivals heading into the break at Al Salam Stadium, Cairo.