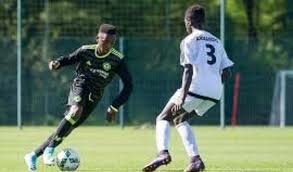 Nigerian under-17 national team Golden Eaglets former player, Adrian Akande has received a strong link with Swansea City of England with hints of a likely move to The Swans this summer on the cards for him, megasportsarena.com reports.

Although he initially had high hopes of growing through the ranks at Stamford Bridge n order to join the man team at Chelsea of England, Akande has now turned his focus on getting his career breakthrough under less demanding conditions.

That has seen him reach a tentative agreement with Swansea already, as he aims to start his senor career with the Wales-based side and then think about seeing another shot at The Blues’ mainframe in London, where he cut hs teeth as a d and gained Nigeria’s attention n 2019.

A report by allngerasoccer.com adds: “The Chelsea Academy product has signed a scholarship deal with The Swans with effect from July 1, 2020 but as from October 22 when he turns 17, the agreement will be converted to a professional contract that will see him remain at the club until the end of the 2022-2023 season.

“Described as a crossbreed of Eden Hazard and Ousmane Dembélé, he played for the youth teams of Crystal Palace before he was snapped up by Chelsea. Swansea City have pulled off a transfer coup to land Akande as the winger was linked with a plethora of clubs in England and abroad after he made it clear he was not going to sign a scholarship with Chelsea.

“Prior to agreeing terms with Swansea City, the 16-year-old trained with Manchester United, West Ham United, Glasgow Rangers and Bundesliga club Hoffenheim but he felt they were not the right clubs for him as he is aiming to make his professional debut within two years.

“Akande was a member of the Golden Eaglets squad to the 2019 U17 Africa Cup of Nations and was named to the country’s provisional roster for the World Cup in Brazil but couldn’t join the training camp due to other commitments.”