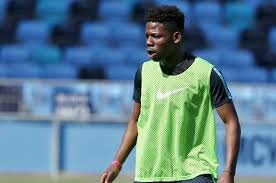 Watford of England midfielder, Tom Dele-Bashiru has promised that he and his colleagues in the Nigerian under-23 national team, Olympic Eagles will work together collectively, in order to pick the ticket to Tokyo 2020 next month in Egypt, megasportsarena.com reports.

The member of Nigeria’s second to this year’s FIFA U-20 World Cup in Poland is set for his second international championship since switching allegiance from England, and Dele-Bashiru says the only thing he is thinking about is helping Imama Amapakabo’s side win the Africa U-23 Cup of Nations in The Land of The Pharaohs.

Winning the championship will not only confirm Nigeria as back-to-back champions of the competition, it would also confirm an automatic ticket to next year’s Olympic Games in Tokyo, Japan, and Dele-Bashiru says that is exactly what all the players are planning to do.

Nigeria won the 2015 edition of the U23 AFCON in Senegal and went on to clinch bronze at Rio 2016 Olympics in Brazil, both of which Dele-Bashiru believes they are capable of replicating, with a bunch of talented players, even as they prepare to face Cote d’Ivoire, South Africa and Zambia in Group B of the continent’s qualification competition, which kicks-off on November 8 in Cairo.

Dele-Bashiru told SCORENigeria: “We’re capable of qualifying for the Olympics. We have many good players, who will work together as a team to get the results. Nigerians should continue to support us all the way and we will give our best to make them proud.”