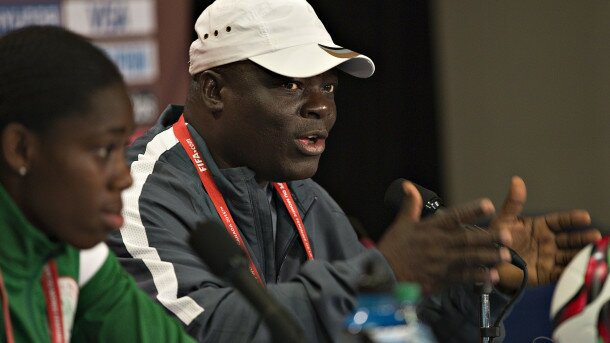 Nigeria coach Edwin Okon (R) and player Asisat Oshoala talk to the media at a news conference prior to a training during the 2015 FIFA Women's World Cup in Vancouver on June 15, 2015. AFP PHOTO/ANDY CLARK (Photo credit should read ANDY CLARK/AFP/Getty Images)

Barcelona Femeni of Spain attacker, Asisat Oshoala is heaping praises on Nigerian female national team, Super Falcons’ former coach, Edwin Okon for the role he played in shaping her career during their time together at Rivers Angels FC of Port Harcourt, megasportsarena.com reports.

While Okon went on to handle the nation’s senor squad at a point, Oshoala made her top marks first with the youth team Falconets n 2014 and was quickly promoted to the Falcons just few months later, which earned her a surprise accolade as African Women Footballer of The Year.

After claiming another three continental awards, added to the first n 2014 and latest in 2019, Oshoala has now taken her mind back to the surge she enjoyed playing under Okon, who she declared was major reason behind her international breakthrough, after first making waves playing for her youth club, FC Robo Queens of Lagos.

The former Liverpool and Arsenal Ladies of England star revealed further that Okon gave her the push and confidence to develop from being a defensive midfielder into a fleet-footed attacker, even as she also won the 2014 Nigeria Women’s Football League title as well as the 2013 and 2014 editions of the FA Cup with him at Rivers Angels.

Oshoala submitted: “Shout out to Coach Edwin Okon. He had so much influence on my game. I started back then at Rivers Angels as a DM, but he encouraged me to go forward and express myself and even eventually converted me to a striker.”