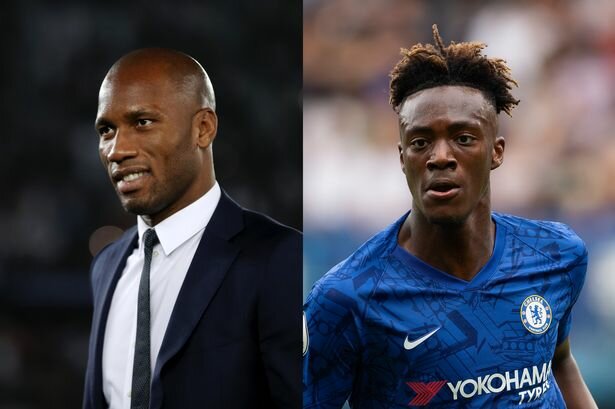 Chelsea of England’s Nigerian-born striker, Tammy Abraham has revealed that he still idolizes the London-based club’s former top scorer, Didier Drogba, as he says the Ivory Coast star remains a shining example he has always wanted to style his game pattern after, megasportsarena.com reports.

With Drogba having enacted many firsts and helped The Blues to several trophies, Abraham says he is hoping to follow in the footsteps of the former African Footballer of The Year, now that he is the English Premier League club’s preferred number nine player up front.

The fearsome Drogba, who Abraham grew up idolizing, joined Chelsea from Olympique Marseille of France in 2004 and became the club’s highest-scoring foreign player ever, while also ranking as the London side’s fourth-highest scorer among all players.

The Ivorian won a host of trophies with the Blues, including four Premier League titles and four FA Cups, and most memorably scored the game-tying goal and the winning penalty in the 2012 Champions League final against Bayern Munich.

Drogba confirmed his retirement only last fall, after finishing his career in Canada with USA’s Major League Soccer (MLS) outfit, Montreal Impact and then second-division outfit, Phoenix Rising FC, while Abraham is only just beginning his senior Chelsea career, having spent the past three seasons out on loan, but has scored a double in each of his past two EPL matches.

The 21-year-old Abraham, who came up through Chelsea’s academy and was in The Blues’ youth ranks while Drogba rose to become a legend at Stamford Bridge, says he is now aiming to step into the Ivorian star’s shoes, but the dark-skinned lanky lad admits it will not come easy.

As he returns to the EPL’sw vibrant hunting fields this weekend, with an outing on Saturday away to Wolverhampton Wanderers at Molineux, Abraham, who has four goals to his name so far this season, confessed that he is looking to emulate the impact created at Chelsea by Drogba.

Abraham told Mirror newspaper: “I have so many stories from when I was younger watching him, growing up watching such a talented striker.