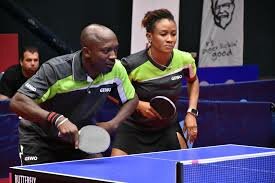 Two Nigerian veteran table tennis players, Segun Toriola and Funke Oshonaike are gunning for historic outings and remarkable milestones at this year’s Olympic Games in Tokyo, Japan, as their named have been included in the qualification roster released by African Table Tennis Federation (ATTF), megasportsarena.com gathered.

Toriola will be aiming to become the first male African to get eight appearances at the Olympics, while Oshonaike will be targeting her seventh outing as the continent’s first female player, after their names were included in the list to compete in the singles and mixed doubles qualification event scheduled for February 27 to 29 in Tunis, Tunisia.

Eight players made up of four men and four women in singles including one mixed doubles pair will qualify for Tokyo 2020 Olympic Games in Tunisia, where each national association is expected to present two players each in the male and female singles as well as one team in the mixed doubles event.

Already, Egypt as African champions in men and women team event has picked the African sole slot in team event while two men and two women from the Egyptian team will feature in the singles event of Tokyo 2020.

Topping the list of men’s singles heading to Tunis is Nigeria’s Africa number one, Aruna Quadri and his compatriot, Olajide Omotayo, as well as Gedeon Kassa and Diawaku Diamuangana of DR Congo, Habeb Alajaebi and Salh Abodib of Libya, Ibrahima Diaw and Hamidou Sow of Senegal, Derek Abrefa and Emmanuel Commey of Ghana, Ahmed Djamal of Djibouti.

The women are Flavia Kimbu and Cyntia Nzangani of DR Congo, Sarah Hanffou of Cameroun, Offiong Edem and Olufunke Oshonaike of Nigeria, Rahma Houssein of Djibouti, Nandeshwaree Jalim of Mauritius, Marta Gulti of Ethiopia, Abir Salah Haj and Fadwa Garci of Tunisia, Lynda Loghraibi and Katia Kessaci of Algeria, Christy Bristol of Seychelles as well as Doreen Juma and Lydia Setey of Kenya.

African champions Omar Assar and Dina Meshref of Egypt top the list in the mixed doubles event, for which they will be joined by Gedeon Kassa and Cyntia Nzangani of DR Congo, Segun Toriola and Olufunke Oshonaike of Nigeria, Ahmed Djamal and Rahma Houssein of Djibouti, Fadwa Garci and Mamia Thameur of Tunisia, Sami Kherouf and Lynda Loghraibi of Algeria as well as Godfrey Sultan and Christy Bristol of Seychelles.

The singles events for men and women will hold in a round robin format, with players in groups of four each, after which winners and runners-up of all pools in the first stage will be drawn into the second phase to play another round robin system to decide the top four positions that will qualify for the Olympic Games.

While the allotment of players in groups will be based on the latest African ranking for February 2020 in singles and mixed doubles, with all matches in all stages decided from the best of seven games, the mixed doubles will be played in a simple knockout from the beginning to the final and the winning pair will directly qualify to Tokyo 2020 as Africa’s representative in Japan.