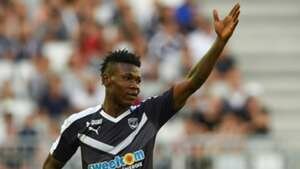 Girondins-Bordeaux duo of Samuel Kalu and Josh Maja will no longer have to bother about any threat for their shirts by Belgian international, Christian Benteke, as their club has dropped interest in the Crystal Palace star, megasportsarena.com reports.

In contrast with initial reports that Benteke could be on his way to rival Kalu and Maja at Bordeaux, the Ligue 1 outfit have sensationally ended their pursuit of striker, because they do not want to pay a £500,000 loan fee Palace are demanding.

Sky Sports News cited reports in French newspaper, L’Equipe that Bordeaux are now considering alternatives to Benteke, who Palace were initially said to be keen on seeing on loan this month, as The Eagles’ coach, Roy Hodgson has already bolstered his forward options this month with the signing of Cenk Tosun on loan from Everton for rest of the season.

Incidentally, Kalu could have been the one to suffer most had the deal gone through, as he had been tipped for an exit from Bordeaux, to make room for Benteke, who has failed to register a goal or an assist for Palace in 15 English Premier League appearances this term, and has only 19 goals in 98 games over four seasons since joining The Eagles from Liverpool for £32m in 2016.