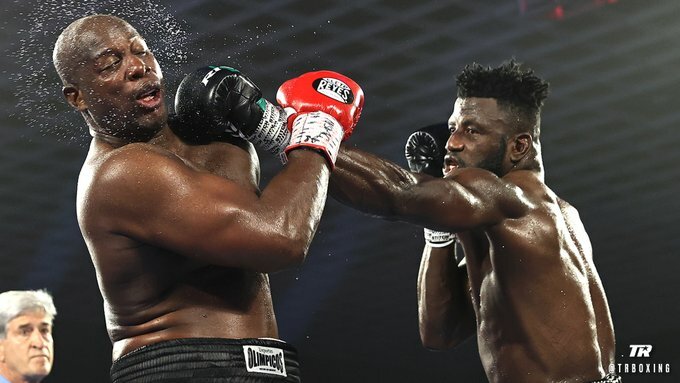 America-based Nigerian heavyweight boxer, Efe Ajagba survived a broken wrist and had to labour to a points victory over Jonathan Rice during his debut outing under the banner of Top Ranks Promotions in Las Vegas, USA, megasportsarena.com reports.

Despite his unconvincing bout, though, Ajagba still extended his unbeaten record to 14 wins, as he pulled off a unanimous decision over Rice, but fight pundits believe it would have been a wider margin had the Nigerian not suffered the injury.

Pain and discomfort in his hand apparently slowed Ajagba down, distracted him and reduced his power from producing an expected knockout in favour of the fast-rising Nigerian pugilist, who previously stopped 11 of his opponents with explosive punches.

This time, though, the 2016 Olympian could only work hard to control Rice for 10 rounds, warding off his opponent with his stiff jab, and it turned out to be a tough yet successful ESPN debut for Ajagba, who stepped out for the first time after his recent move from American boxing group, Premier Boxing Channel to Top Rank Promotions.

His first outing against USA’s Rice on Saturday went the distance and it read a scorecard of 98-92, 99-91 and 99-91 split decision from the judges, as Ajagba survived the injury scare to add yet another victory to his name from the keenly- contested bout at The Bubble in Nevada.

A report by Boxing Scene revealed that Judge Max DeLuca had the bout 98-92, while Adalaide Byrd and Dave Moretti both scored it 99-91 in favour of Ajagba, who had it easier in most of his previous fights but was pushed to the limits against Rice.

Saturday’s ten-round unanimous decision over the 33-year-old Rice becomes only the second time Ajagba would win a fight via that route, having knocked down all his previous challengers, but had also been dragged over the distance by previously unbeaten Ali Eren Demirezen last July at MGM Grand Garden Arena.

That fight also saw 26-year old Ajagba fight through an injured elbow for much of the night but was still able to get victory, which has now been followed by another conquest that improved his record to 14 straight wins, while Rice suffered his second straight defeat in falling to 13-6-1 (9KOs).

Rice had previously been stopped in the 10th and final round on March 7 by Demsey McKean in Queensland, Australia; while Ugheli-born Ajagba insists he is still en route to fulfilling his dream of unseating Nigerian-born world heavyweight four-belt champion, Anthony Olaseni Oluwafemi Joshua, who holds the WBA, IBF, IBO and WBO titles.

Ajagba told Sky Sports: “The people would support Joshua because he is the heavyweight champ. Skill would beat Joshua, not power. Me and Joshua both have the power, but skills control the power. I have more skills.”