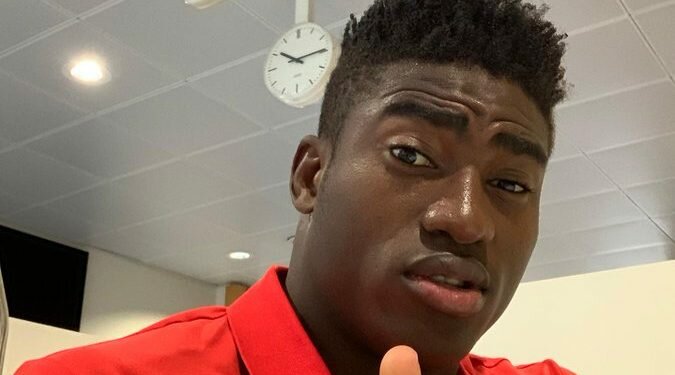 SV Mainz 05 of Germany striker, Taiwo Awoniyi has been declared heading back quickly on the road to full recovery, after suffering a death scare in last Sunday’s German Bundesliga encounter at home against Augsburg, megasportsarena.com reports.

This declaration was provided by the medical crew at Mainz, who disclosed that Awoniyi was back to full consciousness later same day, after suffering concussion during their 1-0 loss to the visitors at Opel Arena, when he was forced off in the 23rd minute and replaced by Nigerian-born Austria international, Karim Onisiwo.

However, Mainz’s sports director, Rouven Schroder disclosed that Awoniyi will miss at least two Bundesliga games because of the incident, with his absence set to begin with Wednesday’s clash versus Borussia Dortmund and then against Werder Bremen on Saturday.

The UAE 2013 FIFA U-20 World Cup winner fell with his neck first and then lay flat on the ground following a clash of heads with a Nigerian-born defender on the opposing side, Felix Uduokhai, thereby causing several minutes of delay in the game, as match officials and medics worked hard to revive Awoniyi, who has a single goal from 11 Bundesliga matches so far this season.

While the match was played behind closed doors, everyone at the arena was left stunned, after Awoniyi was stretchered off with his neck in a brace and motionless, after which he was rushed to the hospital for further observation.

Palpable tension and worries over his health were, however, doused after Mainz took to their official Twitter handle to reveal that the 22-year-old star, who joined the club last summer on loan from Liverpool of England, regained consciousness in hospital.

However, Awoniyi will not be fit enough to play a part when Mainz take on Borussia Dortmund in their next league game this Wednesday at Signal-Iduna-Park, as doctors advised it is best to further rest the Nigerian forward, who signed for Liverpool in 2015 but is yet to play any match for The Reds, who have loaned him in quick succession to FSV Frankfurt of Germany, NEC Nijmegen of Holland as well as KAA Gent and Royal Excel Mouscron of Belgium.

Following Sunday’s defeat against Augsburg, Mainz are now three places above relegation zone, with 31 points from 31 games, having won nine matches, drawn four and lost 18 games, but the team that have won only one game in their previous seven outings may now have to be without Awoniyi, who started five matches in rapid succession, the last of which was almost ill fated.

Mainz tweeted: “Already on the road to recovery! Flexed biceps. Taiwo Awoniyi sends his thanks to the Mainz medical staff and those at @UnimedizinM as well as to his teammates.”

Awoniyi also gave thanks for his survival as he praised the match referee, his club’s medics, doctors at the hospital and his teammates for their joint-roles in keeping him alive; adding: “I would like to praise our medical department at Mainz 05 and Mainz University Medical Center. They looked after me very well.

“The last thing I can remember from this scene is how I hit the ball with my head, and then I passed out. It was difficult for me on the field to regain consciousness and really awake and it also took a little while before I could remember everything. But I feel much better now. God who protected me in this situation and made everything possible for me anyway.

“I thank the dear God who protected me in this situation and made everything possible for me anyway. Unfortunately I will not be able to help my team on the pitch in Dortmund, but I will support them as much as I can. Together we will give everything for the fans and secure relegation, I’m sure of that! ”