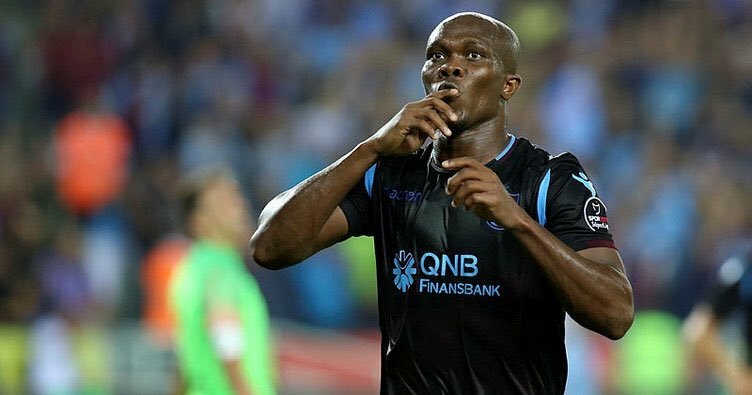 Trabzonspor of Turkey striker, Anthony Nwakaeme is cherishing his ninth goal in continental European football, after notching one for his Turkish Super Lig club in their 3-1 loss away to Krasnodar of Russia, megasportsarena.com reports.

While former Eagles’ captain, John Mikel Obi and Eddy Ogenyi Onazi were both not dressed for the game in Russia, Nwakaeme got off the visitors’ bench in the 65th minute and struck in the 90th, thereby taking his tally for this season to three goals and four assists from 18 games.

In making his mark further during the Group C match at Stadion FK Krasnodar, Nwakaeme got the ball on the left and cut into the area to fire low across Safonov and inside the far post, his ninth European goal in 38 matches.

In a Group J clash at Stadion Graz Liebenau, Azubuike Okechukwu started and was in action for 89 minutes with Istanbul Basaksehir of Turkey, with his efforts helping the club go top after in a 3-0 win away to Wolfsberger AC of Austria.

Sadiq Umar played for 86 minutes for Partizan Belgrade but could add to his Europa League tally of two goals at Old Trafford in England, as Manchester United floored his team 3-0 to seal their qualification to the round of 32 of the second-tier continental competition.

In a Group G clash at Ibrox Stadium, Joe Aribo got off the bench for Glasgow Rangers of Scotland, as they beat visiting FC Porto of Portugal, with goals from Morelos and Davis, to move three points clear of the former European champions, with the Super Eagles’ new sensation going on in the 83rd minute for his 22nd appearance of the season in all competitions.